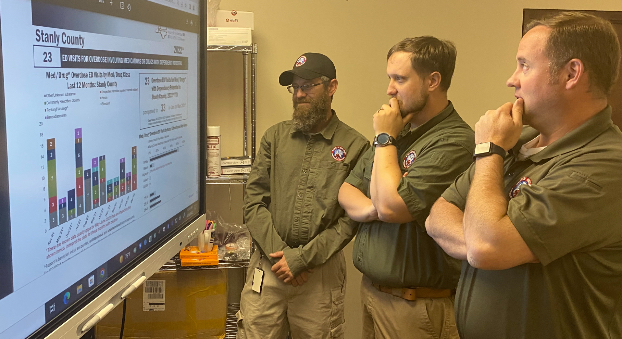 For much of the past decade, Stanly County led the state in opioid overdoses, measured by the rate of overdoses showing up in hospital emergency rooms. When it was not ranked No. 1, it was at least firmly positioned within the top 10 — usually among the top three counties.

However, the issue of drug overdoses still persisted.

It was a reoccurring nightmare the county could seemingly never awake from.

Throughout much of the COVID-19 pandemic, when people were spending more time at home, paramedics were still responding to overdose calls. But over time, the numbers gradually began to decline.

“We started trickling out of the top three into the top 10, which we considered a huge success because of the amount of time we had been in the top three,” Deputy EMS Chief Mike Campbell said.

It wasn’t until late last summer when a real change occurred. For the first time in many years, Stanly County fell out of the top 10. And as many nearby counties, such as Montgomery and Richmond, have seen overdose numbers increase of late — both are in the top 10 as of January, the most recent data available — Stanly has continued to see a decrease in its numbers.

Community paramedics, which currently consists of four full-time medics, responded to 192 opiate overdoses calls last year, a 26 percent decrease from 2020, when it responded to 258 calls, according to internal data shared with The Stanly News & Press. These numbers do not include calls with multiple patients or calls with the same patients multiple times within a 24-hour period.

There’s also been a notable uptick in the distribution of Narcan kits, a medication that reverses overdoses and helps save lives. Paramedics issued 55 such kits in 2021, almost double the number issued the year before (30).

“We’ve seen a drastic decrease in overdose calls,” Campbell said, noting the department is averaging about 12 overdose calls a month, a more manageable load compared with the 45 to 50 monthly calls he said paramedics were responding to throughout much of 2020 and 2021.

The decline in overdoses has been a team effort, Campbell said, involving not just the paramedics but several other groups such as Project Lazarus and Uwharrie Harm Reduction Initiative, a nonprofit affiliated with North Carolina Harm Reduction Coalition that serves individuals in Stanly and the surrounding areas struggling with substance abuse.

“We do a great job working together and combining resources,” Campbell said. “So if there’s something that somebody needs, we can all work together to get that patient what they need when they need it.”

At the height of the pandemic, when vaccines were first becoming available to the public, the community paramedics began partnering with the health department and SCUSA to provide in-home COVID-19 vaccines to people who lacked transportation to vaccination sites.

Campbell estimates the community paramedics have vaccinated around 2,500 to 3,000 people and are still going out when needed.

“We’ll continue to offer it as long as the need is there,” he said. “It’s easier to go to people than to have people come to you sometimes.”

Providing vaccines to home-bound residents is just one example of how the community paramedic program has continually adapted to best serve the public.

“The thing about community paramedics is they’re kind of like the Swiss army knife,” said EMS Manager Dale Chandler, who took over the position following Michael Smith’s retirement late last year. “They’re a little bit of everything from counselor to paramedic to nurse to home health. They do it all.”

Whenever responding to overdose calls, community paramedics discuss with patients options if they refuse transfer to the hospital (which usually about 60 percent do), including going over the pros and cons of receiving treatment at facilities like Monarch and Nazareth.

“We try and pair them with treatment that best fits their needs,” Campbell said.

Since its creation, the community paramedic program has served as a model for departments across the state, especially when it comes to adaptability. Just last month, for example, Campbell, Chandler and Lt. Phil Smith spoke about the importance of paramedicine at the North Carolina Association of County Commissioners’ Strategy Summit in Greensboro.

“We had an idea that was heavily stigmatized and a lot of people thought it wouldn’t work, and we kind of turned that into a national model to where other agencies and states are looking at what we’re doing,” Campbell said.