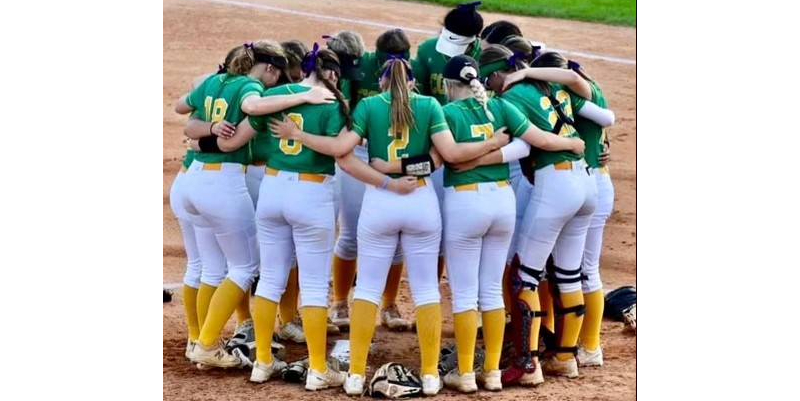 The West Stanly softball team takes a moment before the last game of the regular season. West Stanly will open at home next week in the opening round of the state 2A playoffs. (Contributed)

West Stanly’s softball team entered the 2022 season with a new head coach and six seniors graduated from a program which has won two straight 2A state titles.

The Colts started the season 5-3 with non-conference losses to North Davidson, Mooresville and Providence by a combined margin of four runs.

West turned things around by winning the next 15 in a row, including a perfect 8-0 conference mark to claim this season’s Rocky River Conference regular-season title.

With last week’s 2-0 win versus Anson, the Colts (20-3) won the school’s fourth straight RRC in as many seasons, not counting the shortened 2020 season.

“I am so proud of our team this year. We have had some ups and downs this season, but have worked hard to be a little better team every game we play. Our whole team have pushed themselves outside of their comfort zone to become better players,” first-year head coach Emily Smith said.

“They have worked together as a unit and been there to support one another throughout this season. I can see many developments in our team from March until now. We have played a tough schedule to challenge ourselves and put ourselves in pressure situations. I am very proud of them for winning the RRC this year. They have had to work extremely hard for it.”

Included in the success this season is the team’s leading hitter, junior Teagan Ritchie. She leads the Colts in several categories, including runs batted in (40), on-base percentage (.518) and slugging percentage (1.309). Her batting average (.451) is second for West and her 17 home runs this season leads the team, setting a school record for most home runs in a season.

Six Colts are hitting .350 or better this season, led by sophomore Kristen Smith (.482). Smith leads the team with 40 hits.

Equally impressive for West this season has been its defense, starting with inside the pitching circle. Lily Huneycutt, a junior, is 18-2 this season with a 1.11 earned-run average. In 125.2 innings pitched, she has walked 13 and struck out 168, a strikeouts-to-walk ratio of 12.9. Opponents this season are hitting just .165 against her.

West has outscored the competition 185-40 this season. The Colts are the No. 1 ranked team in the 2A West and third overall in the state regardless of classification, according to MaxPreps. (Sports Editor’s Note: The previous sentence was edited to reflect this week’s rankings.)

After this week’s Rocky River Conference tournament, West opens play in the state playoffs with a home game Tuesday night.

“As for the postseason, we are going to take it one game at a time, like we have all year. We want to keep focused on each game and play with intensity and passion,” Smith said.