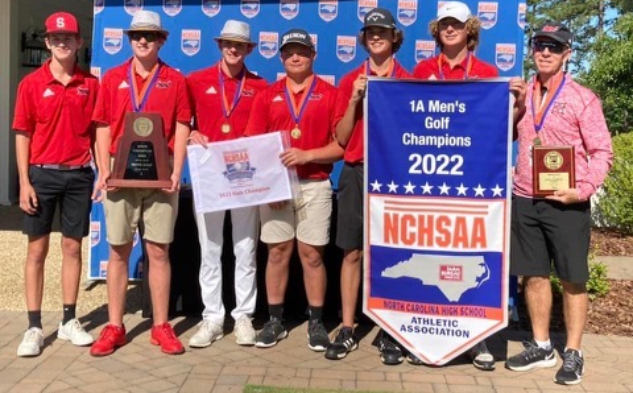 The South Stanly golf team took to the links at Longleaf Golf and Family Club in Southern Pines this week with the chance to win the school’s first state title in the sport.

South entered the state finals having won the 1A Midwest Region title, with Dustin Hurley having won medalist honors at regionals.

In the two-round state finals, South led after the first round and won the 1A championship Tuesday.

Hurley was the top golfer for South, shooting rounds of 86 and 82 to finish with a 168 in 10th place overall on the individual standings.

Turner, a 2022 YVC All-Conference and All-Stanly selection, was an alternate for the Bulls this season and earned one of two NCHSAA Sportsmanship Award trophies.

Head coach Doug Smith said South’s efforts came during tough conditions, with morning temperatures in the 40s with winds changing directions and gusting up to 30 miles per hour.

Smith mentioned Hurley as “one of the team’s stronger iron players.”

The South coach also credited the team’s balanced effort as the players maintained scores in the 80s, saying the team’s “steady play overcame the blistering final round” from Mitchell’s Connor Warren. Warren shot the low round of the tournament Tuesday with a -2 under round of 70.

“South has great team depth and will return these six players, four juniors and two sophomores next season,” Smith said. “South will likely be a team to watch out for next spring.”

South’s state championship in men’s golf is the first for a Stanly team since Albemarle won the 1998 1A title.

In other results from the 1A finals, Gray Stone had three individuals compete. Wyatt Reader, a junior, finished 11th overall in the individual standings with rounds of 80 and 89.