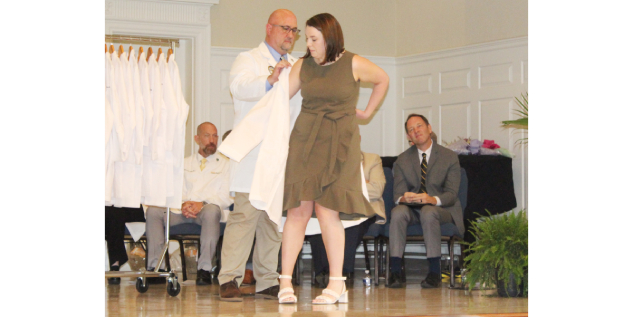 The first graduating class from the physician’s assistant program of Pfeiffer University received their white coats Friday, emblematic of their upcoming graduation from school.

Henry Pfeiffer Chapel hosted friends and family of the 19 students of the inaugural graduating class, which took their lessons first on the Misenheimer campus, then eventually moving to the Pfeiffer University Center for Health Sciences in downtown Albemarle.

In his introductory comments, Pfeiffer President Dr. Scott Bullard remembered two years ago when speaking to this class one student asked if they would pray for them while they navigated microbiology, which elicited laughter from the graduates and attendees.

Bullard gave those in attendance who were on the Pfeiffer campus for the first time a brief introduction to the Misenheimer campus, talking about founder Emily Prudden. Bullard also said while some grads may be thinking about prestige, breaking the cycle of poverty, a new alma mater or friendships developed, he challenged them to think like Prudden and be “agents of healing.”

Dr. Cragin Greene, director of academics for Atrium Health’s Center for Advanced Practice, was the keynote speaker. A PA in the Department of Emergency Medicine at Atrium Health in Charlotte, Greene served as the president of the Association of Postgraduate PA programs.

Greene encouraged graduates to say yes to opportunities as they start their respective journeys as PAs. He said being a PA is “all about patient care. Everything that you do has to deal with better health for your patients. If you lead by that guiding principle, you can never be wrong.”

The speaker mentioned six points for graduates to consider as they begin their careers as physicians’ assistants: gratitude, humility, perseverance, flexibility, open mindedness and resilience. He mentioned several times in his address, “Medicine is hard.”

Regarding resilience, Greene implored the graduates to take care of themselves as well. “You have to be the best you to take the best care of your patients.”

Tom Earnhardt, assistant professor of the Master of Science in Physical Assistant Studies program, then presented each graduate with a white coat with their name on it.

Pfeiffer Dean of the Graduate School Dr. Christopher Boe gave closing remarks, urging graduates to consider “the dispositions necessary to be successful in the healing professions.

“It is my sincere hope that as practicing clinical care providers, you will through your example and the way you interact with those you serve emulate what you have been learning here at Pfeiffer in the care that you provide to the least, the lost and the last,” Boe said.