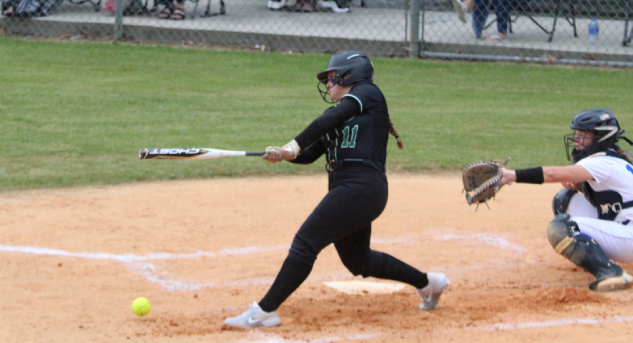 Of West Stanly’s 22 wins heading into Thursday’s second-round home playoff game, only five of them were by one run. Three of the Colts’ four losses this season were by just a single run.

West’s offense gave the Colts a comfortable six-run lead but the visiting Hilltoppers from Rutherford-Spindale Central roared back with a six-run sixth inning. The Colt rallied in the bottom of the seventh to scratch a run across to keep the team’s hopes of a three-peat as state champions alive.

In the seventh inning, pitcher Lily Huneycutt led off with a single, but her courtesy runner was thrown out at third base when Kristin Smith tried to move her over with a sacrifice bunt. Smith moved to second on a bloop single from Teagan Ritchie.

With one out and runners on first and second, senior Ashlyn Hughes, who played on the two previous state championship teams, stepped up.

“I really just didn’t want this to be my last game,” Hughes said about her final at-bat of the game. “That’s what I kept thinking about the whole time.

She sent a sharp line drive deep into the hole between first and second base. As she got to first, the second baseman for the Hilltoppers tried to backhand the ball to first. The ball rolled away and Smith raced towards home, sliding in safely for the win.

“We knew that we had to get it done right there,” Hughes said about winning in the seventh. “We did not want to go back into the field because (the Hilltoppers) have a lot of good hitters. But we weren’t super nervous.”

Head coach Emily Smith said the coaching staff has “preached to our girls all year long that no matter what position you find yourself in, you can never be too relaxed. At this point in the playoffs, everybody’s a great team…you just have to fight to the very last out.”

Smith said West has had a lot of close games but not a lot of high-scoring games. W-S Central (14-10) scored the most runs this season against the Colts in Thursday’s game.

“Seeing the girls evolve from the beginning of the season, when we were in situations like this and would kind of fold,” Smith said. However, at this point, she added, “they push through and they’re confident in themselves and making those plays we need to win the game.”

West’s coach noted the Colts’ tough strength of its schedule, which according to MaxPreps is a +13.1, the highest of any of the teams ranked in the top 20 overall regardless of classification.

Smith said West plays tough opponents “to be in situations like this and play good teams so we’re ready for the postseason.”

Huneycutt earned the win on the mound for West allowing six earned runs on 11 hits with no walks and five strikeouts.

Hughes had a big night for West with two hits and three RBIs, while Smith had three hits and drove in a run.Lily Hartsell added two doubles and an RBI, and Elizabeth Ingle added two RBIs. West had 14 hits in the game.