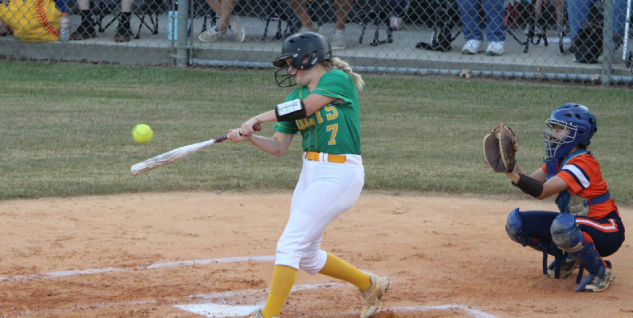 Despite going down early as they did in the previous game, West fought back and earned a third straight trip to the regional finals with a 7-4 win over the Bearcats.

Lily Huneycutt overcame an early home run and earned the win for West (25-4), allowing one hit over the final six innings and three total. She gave up two earned runs, with one walk and seven strikeouts.

West’s bats racked up 10 hits in the game of Anson (17-8) starter Haleigh Boone, who gave up six earned runs in the game, walked three and struck out four. Kristin Smith, Teagan Ritchie, Brooklyn Lovin and Lily Hartsell had two hits each, with Smith driving in two runs.

Anson got off to a fast start with a one-out, seeing-eye single between first and second from Cierra Lear. Camryn Martin then took a 2-0 pitch deep over the left-field fence for a 2-0 lead.

Huneycutt said after the home run she knew she “couldn’t sulk or anything like that. I definitely pushed through it. I knew I wasn’t going to give up. I wanted (the win) just as bad as everybody else did.”

West answered in the bottom of the inning when Ashlyn Hughes delivered an RBI sacrifice fly, scoring Kristen Smith to cut the lead in half.

The Colts tied the game in the second when Lilly Hartsell doubled with two outs, scoring Aliyah Rush to make the score 2-2. 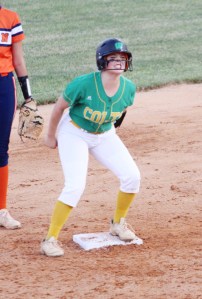 West Stanly’s Lilly Hartsell calls our to her teammates while standing on second base after her game-tying RBI double. (Photo by Charles Curcio/staff)

Teagan Ritchie singled with one out in the third, reached second on a Hughes single and eventually scored on a wild pitch to put West up for good. Brooklyn Lovin and Rush both added RBI singles to give the Colts a 5-2 advantage.

A hushed silence fell over the West fans in the top of the fourth when, on a 2-1 pitch, Huneycutt stumbled and appeared to hurt her ankle. The grounds crew came out and worked on the dirt in the circle, and Huneycutt continued on the mound for the Colts.

Defense for West kept Anson off the scoreboard in the sixth. Ritchie showed her prowess in the field with a tremendous leaping grab on a line drive in the top of the sixth, stopping a Bearcat rally.

West head coach Emily Smith said Martin’s home run was a flashback to the RRC title game, but said the Colts “really came through. We had been working on our approaches at the plate against Haleigh Boone, because she’s an amazing pitcher. We executed and put some hits together.”

Regarding Ritchie’s catch, Smith said it “was a huge play. She’s an amazing shortstop. We preach defense and work on it a lot in practice because that is what will win or lose you games.”

The No. 2 seeded Colts will host No. 5 West Stokes next week in the first game of the best of three series. The Wildcats shut out undefeated 2A West top seed Providence Grove 1-0.

West has home field advantage in the series. Game 2 will be at West Stokes with a Game 3, if necessary, back at West Stanly.

“It’s really important to have a home field advantage in the playoffs. The trips can get really long, especially on a school night. We’re just so thankful for our supportive community that comes out and watches us play,” Smith said.