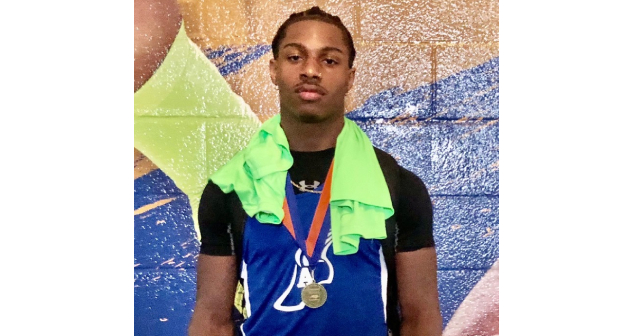 He had dominated the event for the entire season, and at Saturday’s 1A state finals meet, Albemarle’s Ali Currie delivered the gold medal for the Bulldogs.

The Albemarle senior posted a distance of 46-feet, 8-inches in the triple jump, nearly 3.5 feet longer than the next competitor, Union Academy’s Ezra Martin (43-2.75).

Currie said the triple jump “comes naturally” to him, adding “when I first started in track, I felt I was better at the high jump. (With) triple, I notice I’ve made a lot of progress in such little time. I focused on it because it felt better.”

Currie said finishing with another state championship, his second in triple jump in as many seasons, “means a lot because I said was going to do it before I actually did it. It was all part of the plan.”

He added he plans to walk on at North Carolina A&T next year, the school which hosted the state finals meet.

Henry said Currie is one of the hardest working individuals he has worked with in his 27 years of coaching track.

“When he’s focused on something and wants to improve, he pushes himself. (His leadership) rubs off on others that make them push themselves to get better,” Henry said. “He’s very quiet, but he’s very, very competitive.”

Henry said Currie’s family is to credit for his being a compassionate young man.

Currie also placed second in the high jump, finishing just behind Tarboro’s Jerome Bridgers at a height of 6-feet-6. The senior placed third in the long jump with a distance of 21-3.5, just six inches behind Union Academy’s Martin (21-9.25).

In other results, Albemarle’s Slay Jackson took second place for the Bulldogs in the 300-meter hurdles with a time of 41.76 seconds. Robbinsville’s Brock Adams won the event with a time of 40.43 seconds.

Amari Baldwin placed second in the triple jump for the Bulldogs with a distance of 35-9.5, four feet behind the winner, Zoie Shuler of Robbinsville. Baldwin also placed sixth in the women’s 100-meter dash in 12.85. The Albemarle freshman was sixth in the 200-meter dash (26.75), and was a member of the 4×100-meter relay team, along with Anautica Meaders, Abigail Clayton and Aryjha Baldwin, who placed fourth with a time of 51.41.

Gray Stone’s Autumn Misenheimer was 10th in the shotput (28-9) and Mallory Hill placed 1th in the discus throw (71).