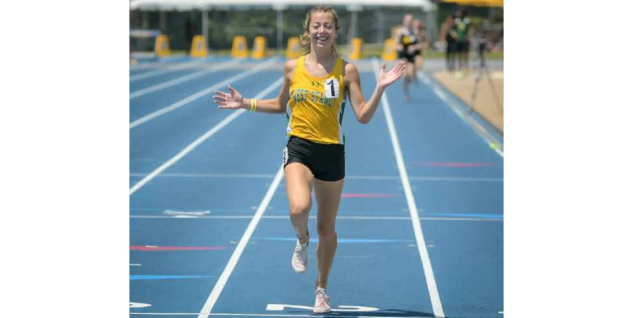 West Stanly's Natalie Almond is all smiles as she crosses the finish line winning the 1,600 meter 2A state title. (Contributed)

One of West Stanly’s most accomplished distance runners added another item to her resume at Friday’s 2A state track meet.

Natalie Almond, a senior who is the second-fastest runner in the history of West Stanly’s cross-country program, took first place in the 1,600-meter run with a time of 5:19.27, 10 seconds ahead of Lincolnton’s Katherine Hopkins.

“I was ranked No. 1 so I knew there would be a lot of pressure on me. I was just going to try and take it at a good pace, but I knew that last lap I was going to have to go the fastest and have a strong kick at the end to pull up the win,” Almond said.

“I wanted to get out strong, but I didn’t want to get out too fast and not be able to finish strong.”

At the 800-meter mark, or halfway, Almond said she decided to “take the lead and just try to finish it out.”

When she crossed the line, Almond said she thought about the six years of hard work that went into her running career.

“It meant all of my hard work and training for pretty much every single run I’ve every done led up to that moment, and it all finally paid off,” Almond said.

She credited her brother, Noah, who was a senior long-distance runner when she was a freshman, as a driving force in her career, along with track coach Robert Murray, as well as her teammates and coaches at West.

“It’s been amazing to watch Natalie continue to get better over the last four years. It shows our younger athletes that hard work pays off,” West head coach Wes Herlocker said.

One other Stanly school was represented at the 2A state track meet. North Stanly’s Paris Bennett finished 10th in the shot put with a distance of 32-3.75.