STANLY THE MAGAZINE: Disc golf continues to grow in Stanly 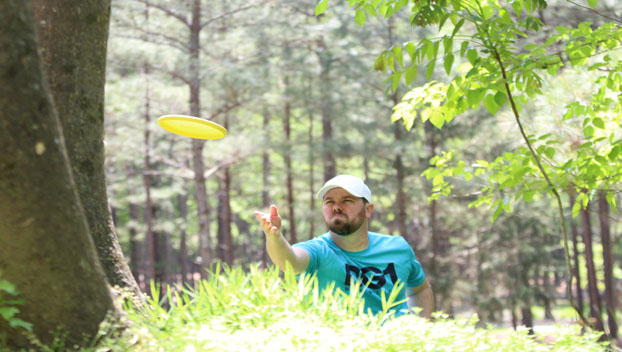 Matt McAuley enjoys a round of disc golf. (Photo by CHARLES CURCIO/staff)

With traditional golf courses like Mountain Brook and the Stanly County Country Club no longer in operation, the popularity of disc golf has risen in recent years.

Disc golf involves the same principles as regular golf, but players throw different types of flying discs, similar to Frisbees, into large metal baskets. The sport started around the 1960s and grew a decade later when the inventor of the Frisbee, Ed Headrick, left Wham-O to start the first disc golf company.

The United States has the most disc golf courses in the world (approximately 6,652), and Stanly has five disc courses, four public (Fox Chase, Oakboro District Park, City Lake Park in Albemarle and Richfield’s Goose Landing) and one private course, Hardaway Point in Badin.

Albemarle has its own disc golf group, the Albemarle Disc Golf Association (ADGA), which conducts a league as well as tournaments which draw in competitors from outside the county.

Many of those tournaments, including the Ice Bowl each February, are played on the original, and perhaps the most physically demanding of the courses in Stanly, Fox Chase.

Within the boundaries of Chuck Morehead Park and operated by Albemarle Parks and Recreation, it is a championship-level 18-hole course which requires golfers to walk over various elevation changes. 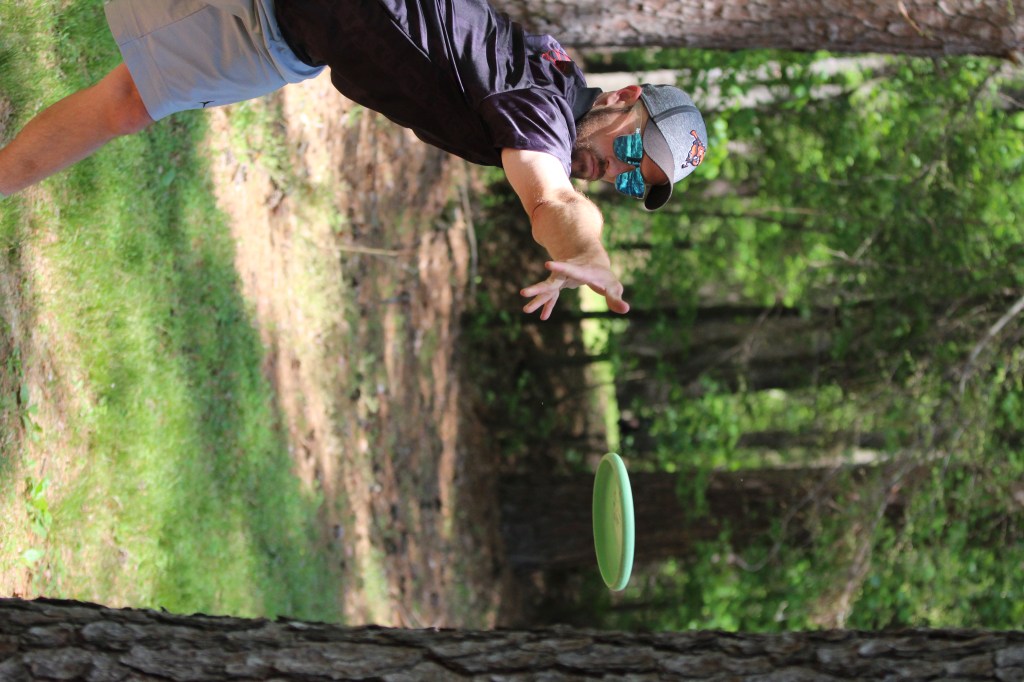 Daniel Diorio takes a shot in a round of disc golf. (Photo by CHARLES CURCIO/staff)

The walking/running track which winds its way through the woods of Morehead Park has hosted many high school championship cross-country meets and tests the fitness of golfers and runners alike.

The Ice Bowl has challenged disc golfers to play in cold conditions for 13 years.

The two-round, one-day PDGA-sanctioned event has had golfers from amateur to professional levels compete in it.

Fox Chase ranks among the most challenging courses in the state and beyond by several disc golf websites.

According to Brent Thompson, president of the ADGA, City Lake recently hosted an event which had around 75 golfers.

City Lake was a nine-hole course, but several years ago expanded to an 18-hole course. The course has some open areas and forest holes with elevation changes less severe than Fox Chase.

Oakboro District Park hosts many events by the ADGA and others on an 18-hole course which has less elevation changes and has pine straw down on the fairways of some of the course’s holes. The signature 17th hole had line after line of trees with less that two feet between each of them. Each hole from the two sets of tees at Oakboro is a par 3 ending in a long par 4.

Goose Landing at Richfield Park, built in 2013, has multiple natural tees and also features one thing many disc golf course do not: multiple water hazards which players have to play shots over to continue their rounds.

The newest disc golf course is also a rarity in the world of the growing sport: a private course.

Owners Vanessa Mullinix and Stephanie Owens, who also own the 1913 Badin Inn on the property, opened the course which was designed by Bryon Carter of the Albemarle Disc Golf Association. The course takes advantage of the former course’s fairways and elevations to challenge golfers for $5 per round.

Hardaway Point is open seven days a week, but also features a bar and grill for golfers, which is open Friday, Saturday and Sunday.

Plans for the course and the club include several tournaments as well as adding a game room with a pool table, air hockey, video games and more.

So why do disc golfers love the game so much? The reasons may be surprising.

Thompson said he discoverd the sport after watching it on YouTube. He then got a starter disc set to try it out.

“I love playing ball golf, but disc golf is something you can do for free and get a workout at the same time. I was physically in better shape but also having fun and enjoyed the challenge of learning how to get better at the game,” Thompson said.

He said he soon discovered the ADGA and played league matches “which developed lots of friendships and also entered a competitive side of the game to me. I soon started playing tournaments and now am a tournament director.”

To those thinking about joining the sport, Thompson said disc golf “is a fun sport that is growing rapidly and can be enjoyed at all levels, whether it’s kids learning the game, a group of buds hanging out and enjoying a casual round or pros playing for cash. Stanly County has some great courses that are highly rated and a fun time.”

“I’ve met guys on the course and through the sport that I wouldn’t have met otherwise. It’s also strengthened existing friendships by giving us a reason to get together for a few hours a week,” Diorio said.

Playing disc golf helps fuel his competitive spirit, he said, as he ages out of other activities.

“League play and tournaments raise the stakes of the game, and allow me to test my skills against others. I went from baseball to adult softball and now I use disc golf to exert myself,” Diorio said.