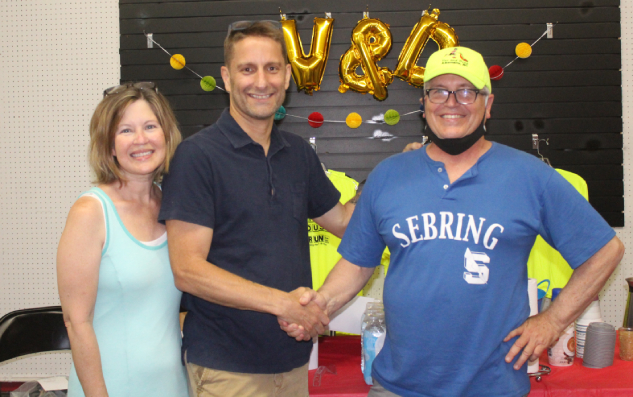 Vac & Dash, with its eclectic range of products and services, has been open for 18 years in downtown Albemare, with founder Peter Asciutto staying connected in the running community while also serving as a county commissioner.

Selling vacuum cleaners along with running shoes, disc golf supplies, screen printing services and more, the store has continued to evolve over the years.

While still staying on the path set forth by Asciutto, new owners have purchased his business and will be changing the name to Uwharrie Dash.

Jason and Nicole Britney, who have lived in Stanly the past four years, took over Wednesday as the new owners.

Jason, who said he is a runner and “a shoe nerd,” noted he often found himself around the store. Buying the business, Jason added, was a spur-of-the-moment decision when he found out Asciutto was thinking of selling it.

The new owners said their focus, like Asciutto’s before, will be on community engagement, along with continuing to feature high-quality running shoes and other athletic apparel.

Some new things Jason said they want to come into the store will be more active sports gear like kayaks and skateboards.

“We’re trying to bring in more to engage the entire community,” Jason said.

Many of the races Asciutto and the Uwharrie Running Club hosted in Stanly, like the Beach Blast and the Turkey Trot, will continue, but Jason said he wants to promote those runs in Charlotte.

“I want it to be an Albemarle race where people recognize that we have something here. That is what Peter built, and I want to build on that foundation,” Jason said.

Having the right shoe for the right feet will be something he said he wants to continue as part of the store.

“Whether you walk, run or just need a new pair of shoes, it’s my job to make sure you get what you need,” Jason said. “That’s our commitment.”

A re-grand opening is being planned for the summer.

The Britneys hosted a surprise party for Asciutto in his last day at the store Wednesday, with pizza and a custom-made Asciutto cookie from the Albemarle Sweet Shop for patrons and members of the community to enjoy.

Thanking those in attendance, including Stanly Chamber of Commerce President Sandy Selvy-Mullis, Albemarle Parks and Recreation Director Lisa Kiser, ADDC Director Joy Almond and Albemarle City Councilman Chris Whitley, Asciutto said, “you all mean a lot to me in a very special way.” He also thanked current and former employees of the store who attended the party.