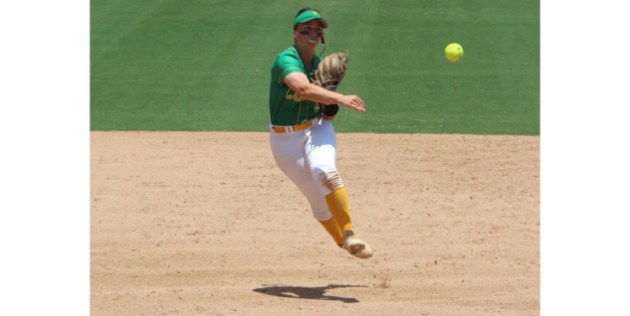 West Stanly shortstop Teagan Ritchie fires across to first for an out in Game Two of the 2A Softball State Finals Series. (Photo by Charles Curcio/staff) 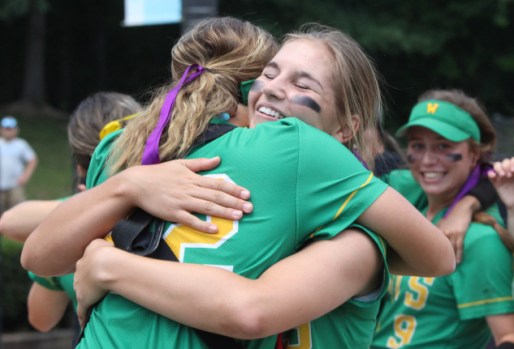 Kristin Smith delivered a two-RBI double in the bottom of the second which gave West Stanly the lead for good in Saturday's game. (Photo by Charles Curcio/staff) 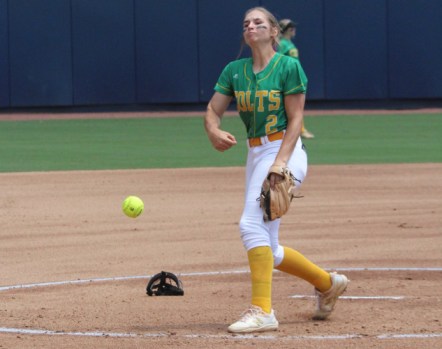 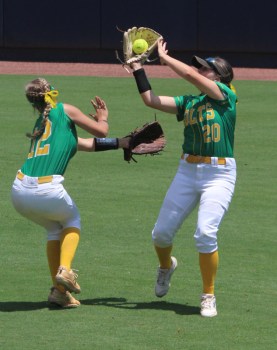 As they had several times in the playoffs, the West Stanly softball team found itself trailing early in Saturday’s second game of the 2A State Finals Series.

Two batters into the game, Washington’s Morgan Eisenzimmer took a 3-1 pitch over the fence in left-center field for a two-run homer in the top of the first.

Lily Huneycutt, in the circle for the Colts, settled in and, with the help of error-free defense played by West, shut the Pam Pack down as the Colts rallied early for a 3-2 win, claiming the series two games to none and the program’s third straight 2A state title.

Huneycutt allowed just two hits over the rest of the game with one walk and 1o strikeouts, earning Most Valuable Player honors for the series.

West bounced back in the bottom of the first, cutting the lead in half with an Elizabeth Ingle RBI sacrifice fly to center field.

In the bottom of the second, the Colts loaded the bases with hits by Aliyah Rush and Lilly Hartsell, with Carmen McRae taking a pitch in the elbow.

With one out, leadoff hitter Kristin Smith came to the plate.

“I was like, ‘We need these runs,’ ” Smith said about her approach to the at-bat. “I trust my team, but I need to step up and do something.”

Smith fouled off the first pitch, which was away, down the first-base line. The next pitch was also outside, and the right-hander again went with the pitch. The ball barely cleared the Washington first baseman’s glove and dropped just inside the foul line for a double, scoring Rush and McRae.

Leading 3-2, Huneycutt and the Colts shut down the Pam Pack (28-2) for the final five innings, with only three batters reaching base.

The best threat for Washington came in the top of the seventh on a one-out triple to right field from Olivia Pazst. Huneycutt struck out the next two batters to end the game and the series.

Offensively for West, Rush finished the game with three of the Colts’s five hits, along with Smith and Ingle.

West’s ability to rally in games, head coach Emily Smith said, “it shows confidence in each other, confidence that we can come back. Even when we get down in a game, even one of this magnitude…it comes down to teamwork and trusting each other.”

In terms of the quick rally, Smith said, “the quicker you can combat when someone scores first on you, the more confidence you have. The longer you wait, you never know what’s going to happen.”

Winning the title in her first year as head coach, after two years as an assistant, feels different, she said.

“I am blessed for this opportunity.”

“Kaylin’s going off to college, but Ashlyn, this is her last game,” Huneycutt said. “It means a lot (for the seniors), but I play for my girls. They give me goosebumps; they are an amazing group of girls that have worked so hard.”

Winning her third state title along with Little, Hughes said this year took a lot more work from the team.

“Losing our six seniors, whom we had for both of the other two teams, was a big hit for us. We knew this year would be more of a dogfight,” Hughes said. “Earning our way back through all the struggles and (suffering) a few losses, it makes it more special. I think this is probably the best one that I’ve been a part of…with all the hard work, it just makes it sweeter.”

West Stanly’s five fast-pitch state titles ties the Colts for second overall with South Granville. Alexander Central and East Surry each have won six in the sport since its inception in 1994.