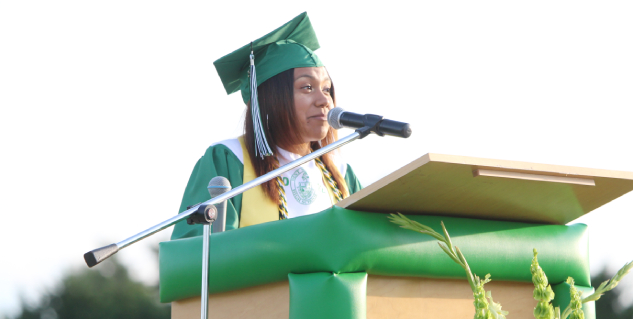 In front of a stadium full of friends, family and loved ones, 155 West Stanly seniors walked the stage and received their diplomas as part of the 2022 commencement exercises.

The first student honor speaker, Eden Campos, reflected on the growth of herself and her classmates through four years of high school, congratulating graduates “for achieving this goal and overcoming every single obstacle.”

Campos mentioned the pandemic year, saying she was told by teacher Wes Herlocker that students would not be back after their extended spring break.

“I laughed at him, called him over-dramatic. But sure enough, two weeks passed and we did not go back to school,” Campos said.

Speaking to Herlocker, she said: “I don’t say this much, but I guess you were right. And for the first time in my life, I was wrong.”

Regarding the time away from school, she said, “Not only did we have to adapt to our new reality, but we were just teenagers beginning to figure ourselves out. I know for me figuring myself out was something I did on my own and through my friends’ experiences. Their successes were mine, as were their heartbreaks and lows.”

Campos thanked her mother, who she said came to America when she was 18.

After speaking in Spanish to her mother, she continued: “To my Latino community, just know that things may be difficult for us, but I know we have the power and the potential to change the world. Our successes will pave the way for the next generations.”

To her classmates, she said: “Thank you for showing me all the different ways success can be defined.”

McLendon had graduates stand up for those entering the workforce, going to college and those entering military service to be recognized. She also mentioned the West Stanly Class of 2022 had earned $6 million in scholarship funds.

Stella Griffin, president of the school’s National Honor Society, was the next student speaker, getting a round of laughter from the crowd when she said she was voted “Worst Driver” as her senior superlative.

Griffin shared the story of a fellow senior who fought hard to get financial aid for college, saying she came to her frustrated when paperwork was missing, having redone it “six or seven times.”

She said she was with the student when she found out she had received $21,000 from UNC-Chapel Hill.

“She knew that she had figured it out, and I know a lot of us have figured it out as well. Whether you struggled to get the credits to graduate, to find motivation to pass the exam, I want to congratulate each of you on figuring it out,” Griffin said.

“As we move forward, I encourage you to do the same. If there is something you can’t find a solution to, please keep going.”

Griffin also said: “We have to find the courage…to do what is right regardless of the circumstances.”

Special music was performed by senior Sophie Tucker as she strummed the guitar and sang “Rivers and Roads” by The Head and the Heart.

The farewell address was given by Vanessa Perez.

“I hope the best years in your lives are yet to come…whether you are attending college, going into the workforce or the military, I hope these years at West Stanly have helped prepare you for your future.”

Students were pronounced as graduates by McLendon and moved their tassels on their mortarboard hats from right to left. Hats flew in the air as the graduates celebrated.