Longtime South Stanly High School English teacher Meredith Howell has always been interested in learning all she can about the Holocaust — and then doing her best to convey the importance of those events to her students.

“I think the biggest thing I took away was to never present just one perspective,” Howell told the SNAP after her 2018 trip. “Teaching (the Holocaust) doesn’t have to be just doom and gloom … there were so many things that redeemed humanity in the midst of it. People who helped, triumphs … there are so many perspectives that show us something.” 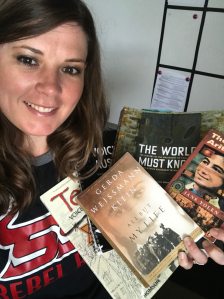 Meredith Howell shows the books she got at the Holocaust Memorial Museum as part of the Belfer Conference in 2018.

After spending many years learning from a distance about the tragic events that took place within much of Europe in the early 1940s, Howell will soon get an up-close and personal view.

Howell was notified in March that she was one of five teachers across the state to receive a $2,500 scholarship from the North Carolina Center for the Advancement of Teaching (NCCAT) to take part in an intensive one-week Holocaust Education Seminar in Poland. The teachers were awarded the scholarships from the NCCAT Development Foundation’s Holocaust Endowment Fund.

“The teacher participants, together with two NCCAT Teacher-educators (also funded by the endowment), will visit the concentration camps of Auschwitz-Birkenau, Treblinka and Majdanek and learn about the Holocaust in the cities of Warsaw, Krakow and Lublin,” a NCCAT press release stated. “There will be a special half day teacher’s educational seminar at the Museum of the History of Polish Jews in Warsaw and a dialogue with Polish high school history teachers.”

The trip will be led by Rabbi Fred Guttman and veteran Holocaust educator Lee Holder, per the NCCAT release. Guttman has been a Holocaust educator for more than 40 years and has led 19 educational seminars in Poland, while Holder, who is a longtime North Carolina teacher and member of the NC Council on the Holocaust, is director of the Gizella Gross Abramson Resource Center for Holocaust and Civil Rights Education in Kinston.

The trip was supposed to take place this summer, but it has been delayed a year due to the war in Ukraine and subsequent refugee crisis engulfing much of Eastern Europe — a significance that was not lost on Howell.

“There will be so many parallels that you can connect with those refugees fleeing from Ukraine and then the refugee crisis of the Holocaust,” she said.

The importance of empathy

Howell, who has taught at South for more than 15 years, was recognized by Superintendent Jarrod Dennis for her achievement during a spring school board meeting.

One of her main motivations for applying for the scholarship is to play an active role in implementing House Bill 69, also known as the Gizella Abramson Holocaust Education Act, which, after getting approved in the General Assembly last year, will require Holocaust and genocide education to be integrated into the 6-12 grade classrooms across the state.

Instruction regarding the topics would be included in social studies classes, English classes and other subjects where Holocaust education would likely be discussed. The bill, which also offers a Holocaust Studies elective for students to take, invites the North Carolina Council on the Holocaust to help with implementing the curriculum. 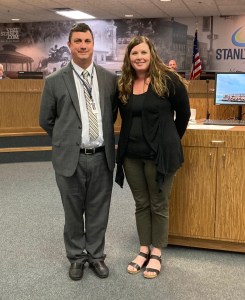 One of the teaching strategies she learned from her time at the Holocaust Museum in Washington and has since applied to her classes is that students should gradually be introduced to the Holocaust in order to prevent overwhelming them with information which can often be heavy and uncomfortable.

And even though reading first-hand accounts, such as Gerda Weissmann Klein’s 1957 autobiography “All but My Life,” and learning about the run-up to the creation of concentration camps can be emotional and at times difficult to process, it’s important for her that her students understand the history of what occurred and the humanity and resiliency found within the survivors.

But for Howell, empathy is especially important. By teaching them about the horrific ordeals experienced and overcome, she hopes her students, in learning to appreciate the significance of the survivors, can also more clearly see the significance within themselves.

“If you can’t emphasize with these people then we’ve missed the boat,” she said.