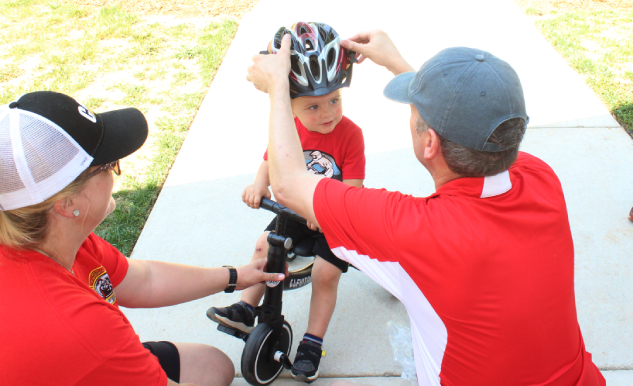 Oliver Webster for Safe Kids Stanly, along with VFD volunteers, gave out free bike helmets for kids and led them through a short obstacle course to learn more about being safe on a bike. After successfully navigating the course, drawn on chalk and using cones in the parking lot of the New London park, kids received a certificate of achievement for learning about bike safety.

Members of the North Carolina Highway Patrol were also on hand to meet young bicycle riders and give out free gear.

According to Holly-Anne Blevins of New London VFD, bike rodeos are common in other areas, saying Stanly has not had many except for one put on by Albemarle Parks and Recreation earlier this year.

“So we took (Albemarle’s) lead and brought one to New London,” Blevins said. “At New London, we are building a strong public education division, and this is our first event.”

Blevins said the rodeo is part of the outreach for the VFD which includes a smoke alarm canvass and giving out free smoke alarms.

“Once the school year starts next year, we’re going to be involved with the schools in our district,” Blevins added.

Cycling is still important to kids, Webster said, adding kids “get out onto the road. If they’re out on the road, as a child they need to wear a helmet.”

Webster said children should wear helmets even in their driveway, which can be as dangerous as the roadways.

“There are cases of parents, unfortunately, backing over kids and stuff like that,” Websiter said.

On or off-road, he said, “it’s important to teach kids to wear the bike helmet and keep it tight under the chin so it fits properly.”

Once a bike helmet has been in an accident, Webster added, the helmet must be replaced.

“There could be hairline cracks in it. It’s compromised once it’s been in an accident,” Webster said.

Safe Kids Stanly trained him, he said, to be able to fit kids’ helmets properly.