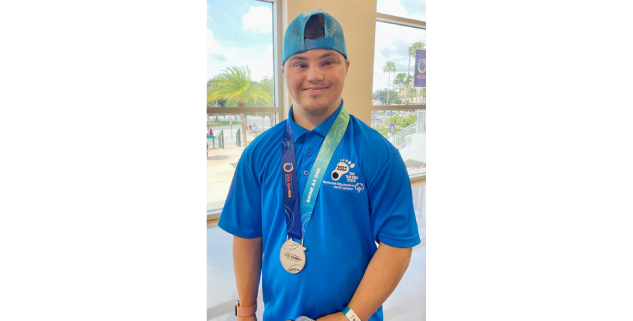 The national Special Olympics recently wrapped up its national competition, with one Stanly athlete walking away with medals.

Wilson started competing with Special Olympics in 2015 and reached the state competition each year. He was one of eight swimmers representing North Carolina. He practiced three to four times a week to get ready for the national competition.

Mark Rowles, who coached Wilson both at West and for Special Olympics, said swimming “is hard. It’s endurance. Just think of the bare necessities of each practice. You’re looking at the eight-inch wide line on the bottom, swimming 25 yards and turning to swim 25 more. It’s monotonous.”

“It’s so much training,” Rowles added. “He did what he had to do and made it work.”

Being at the ESPN Wide World of Sports for the opening ceremonies and swimming at the Rosen Aquatic Center, the coach added, “is magnificent and is everything Caleb and every other athlete deserves.”

Working with Caleb “has been a lot of fun. It’s been a challenge and rewarding more than anything to see someone who overcomes, overachieves and outperforms, defying your expectations. Being involved with him is a privilege.”

Caleb’s mother, Heidi Mitchell, said to her knowledge Caleb is the only Special Olympics athlete from Stanly to compete in the USA Games.

She added part of going to the national games is an interview process with the athlete, his family and local volunteers. Athletes have to fly and stay in a hotel by themselves independently to be part of the national competition.

“It’s a very independent endeavor…you have to have a level of independence to take care of your basic needs and he can,” Mitchell added about her son. “There’s more to (Special Olympics) than getting a medal and competing.”