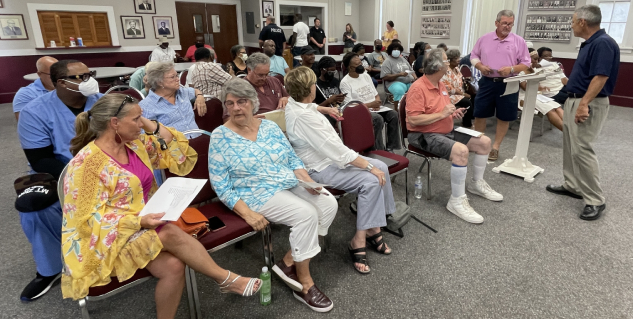 West Badin residents wanting to change the names of the streets in their community made progress after two motions passed by the Badin Town Council at the board’s meeting Tuesday.

The town council voted unanimously to move ahead with an ordinance for the town to be drafted to provide policy and procedures for street name changes. Councilman Larry Milano made the motion, seconded by Councilman Demar Huntley, which passed 5-0.

Councilman Gary Lowder then made a motion “so citizens would know this council will move forward with street name changes,” which was seconded by Huntley. The motion passed 4-1, with Milano voting against it.

Milano stated before the vote, “When we established from the previous motion that an ordinance will dictate the policies and procedures and how it is presented…it’s going over the top. Why are we making more (motions) than we need to?”

Lowder stated the motion was just “to let citizens know we are in favor of changing street names, of procedures and policy.”

Milano said nothing the board has presented is anything different from the council supporting the name changes.

Valerie Tyson, who spoke to the board at last month’s meeting about street name changes, spoke during the public comments section Tuesday. She said when she was growing up “it wasn’t the season to say anything” about the street names.

“The season is now. It’s now…we should have the right to say what we can do, when we can do it and how we should do it,” she added.

Tyson said she remembered a man printing the signs with a brush. She added she wants to leave something for the youth to remember when the sign names change.

Speaking for the West Badin Concerned Citizens group, Avonda Wilson said the desire to change the street names has always been there. She stated she had received feedback from East Badin residents as well, supporting the changes.

She said she did not blame the current board for the street names because they did not name the streets, but she wanted the council to understand why citizens of West Badin want the changes.

“According to historical records, the streets were given these names as possibly an attempt to inspire patriotic sentiments in the black community,” Wilson said.

She noted the attempt was likely made because “the Black citizens weren’t feeling too patriotic” in a time of “segregation, unequal wages and unequal education for their children.”

One street up for discussion was Lincoln, presumably named for President Lincoln. Because of evidence of him stating he was not for “bringing about in any way the social and political equality of the white and Black races,” Wilson said, Lincoln is a street the group would like to see change names.

Wilson mentioned Washington, possibly referring to President George Washington, who owned slaves, as well as Sherman, possibly named for Union Gen. William Tecumseh Sherman, who was named in historical documents as being “incensed at the idea of considering Black people to white” and “was comfortable using the N-word.”

She also mentioned Jackson Street, named presumably for President Andrew Jackson, who owned slaves and “was a defender of slavery and the cruel treatment of slaves.”

“We can’t change history, nor do we want to, but the current street names do not reflect the history of West Badin as an initial Back community,” Wilson said.

The West Badin community, she noted, was built more than 100 years ago, and there have been discussions about the “offensive street names for well over 30 years, maybe longer.”

Anthony Simpson said Wilson’s comments “are how we all feel” and said the ball really get rolling for the name changes again with last month’s Juneteenth Celebration, the third in the history of the West Badin community.