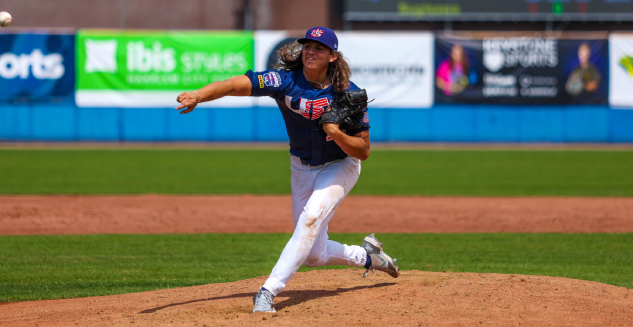 Rhett Lowder, the former North Stanly baseball standout, pitches for the USA National Collegiate team this summer. Lowder, the 2022 ACC Pitcher of the Year, recently traveled with Team USA to the Netherlands for a tournament. (Photo Courtesy of USA Baseball)

Rhett Lowder was a standout on the mound at North Stanly, despite his senior season being shortened in 2020 by the COVID-19 pandemic.

An all-county, All-Conference and All-State selection in his years with the Comets, Lowder joined the pitching staff of Wake Forest and immediately made an impact.

Fast forward to this season where the Demon Deacons doubled their win total and the former Comet made program history along with representing his country playing for Team USA.

Lowder, a sophomore starting pitcher for Wake, was named the 2022 Atlantic Coast Conference Pitcher of the Year, the first Deacon player to earn that honor. He was also the third unanimous All-American in the school’s history,  named All-American by six different organizations.

The former Comet was 11-3 on the season, setting a school mark for pitching wins, posting a 3.08 earned-run average. He walked 26 and struck out 105 batters in 99.1 innings pitched.

Being the first Wake pitcher to earn ACC Pitcher of the Year honors, Lowder said, “was super special.” He added the honor finally recognizes the high quality of pitchers which have played for the Deacons.

Starting as a freshman, Lowder said, and having some ups and downs, helped him to improve this past season.

“I had been through the ropes. I knew what I needed to do to get better,“ Lowder said.

His team doubled up the number of wins they had from 2021, and the team’s improved play helped him while he was on the mound, Lowder added.

“We played better all-around. We had more run support and played better defense. We were all on the same page and were a better team overall,” Lowder said.

Being a NCAA D-I athlete is already difficult, but Lowder said the challenge is greater when going to a tough academic school like Wake Forest.

“It’s demanding on and off the field,” Lowder said. “I take the same mindset whether I’m on the field or in the classroom and just go at it either way, be competitive.”

Holding oneself accountable during the times away from school is also important to be successful, the Wake pitcher added.

With many players opting to play in various wood-bat summer leagues, Lowder was given the opportunity to take part in the Stars and Stars Training Camp at the USA Baseball’s home facilities in Cary. The 50 top non-draft eligible underclassmen were invited to the camp, including Lowder, and the teams played eight exhibition games.

The roster was cut down to 26 players, which Lowder made the cut, and the collegiate team traveled recently to Amsterdam to take part in the Honkbalweek international baseball tournament.

Lowder started the semifinals matchup with Curacao and allowed one earned run on three hits with a strikeout in 3.1 innings. He did not figure int the decision, which went to Curacao in 10 innings, 3-2. Team USA finished the tournament winning the bronze medal over Japan.

For the future, Lowder said he looks forward to his junior season at Wake, saying he hopes the Deacons “go as far as we can, put together a good season and go to the College World Series.”

He will be 21 next July and eligible for the Major League Baseball draft, hoping to be drafted. However, what’s most important to him, he added, is “continuing what I’ve been doing, how to go day in and day out and not get overwhelmed…continuing the process and ultimately just staying healthy.”

Lowder credits his knowledge of the game of baseball to Wake’s coaching staff, saying he wants to be in baseball “whether it’s coaching, scouting or playing in the majors.”