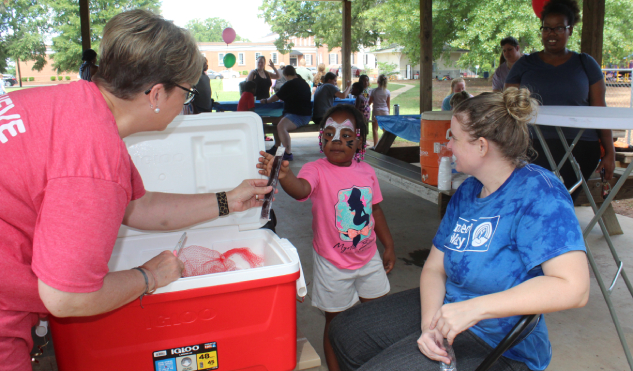 Nora Bennett (middle) gets a freezie pop from YMCA After School and Camp Director Ronda Bunn (left) and Stanly United Way Executive Director Kelly Misiak at the YMCA Back to School event. (Photo by Charles Curcio/staff)

The heat of an August Saturday afternoon did not stop young students and their parents from having some late summer fun and get ready to go back to school at the Stanly County Family YMCA Pavilion.

As part of the Y’s Second Annual Back To School Bash, families received packets of school supplies, reading materials from Partners Health Management, door prizes and other giveaways.

“We are very excited to be able to serve families that need after-school care,” YMCA After School/Camp Director Ronda Bunn said. “Between our five after school sites we serve nine schools. Besides our regular schedule of exercise crafts fun and homework, we will be adding a dinner meal for all of our children.”

Bunn said scholarships are available to help those in need. For those interested, Bunn asks them to contact her at the Stanly County YMCA at 704-982-1916.