The new Charlotte Pipe and Foundry plant in Oakboro is within one year of being fully staffed and operational. (Photo by Charles Curcio/staff) 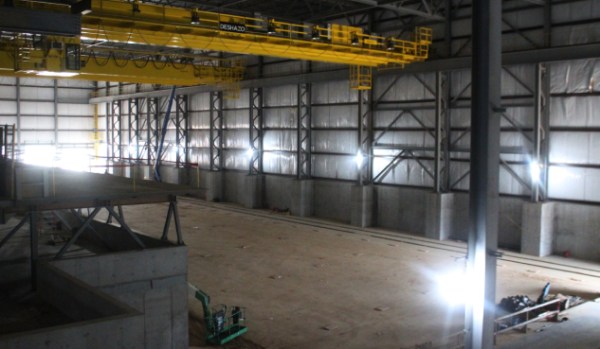 This section inside the new Charlotte Pipe plant will have rail access in order for workers to get raw materials for the company's products. (Photo by Charles Curcio/staff)

The Charlotte Pipe sign at the front of the plant's new offices. (Photo by Charles Curcio/staff) 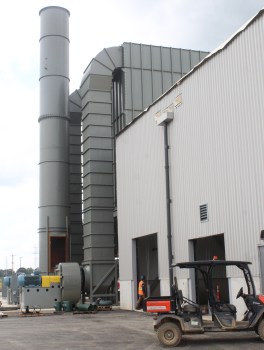 The tall building has sand processing equipment used in the making of pipe fittings, while the stack behind it is part of the dust processing system. (Photo by Charles Curcio/staff)

One of Charlotte Pipe's machines to make pipe fittings is part of the new Oakboro plant. (Photo by Charles Curcio/staff)

The Charlotte Pipe sign at the front of the plant’s new offices. (Photo by Charles Curcio/staff)

Many times, roads in Stanly and other places are closed for road construction and other improvements, but one road outside Oakboro has been closed for a while.

For many residents in the area, the closure of Swift Road is part of having their jobs move much closer to home.

The construction of the new Charlotte Pipe and Foundry facility, on 55 acres at 8560 Swift Road in Oakboro, has made huge strides over the last two years.

According to engineering manager Charlie Ponsheck, the 500,000-square-foot facility broke ground for construction in July 2020. 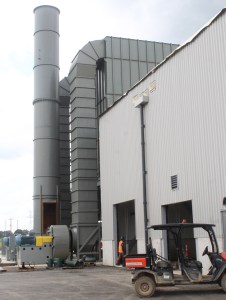 The tall building has sand processing equipment used in the making of pipe fittings, while the stack behind it is part of the dust processing system. (Photo by Charles Curcio/staff)

In terms of progress, Ponsheck said the plant could start doing production testing in December. Plant operations could move completely to Oakboro by July 2023. More than 500 employees will be employed at the plant.

“A lot of these guys have been driving 45 minutes (to and from work) for the majority of their lives. They’re getting ready to have a five to 10-minute drive (that will) change their whole week,” Ponsheck said.

The tower in the plant was built first. Ponsheck noted when the tower and building did not have siding on it, a person standing on top could see all the way to Morrow Mountain.

Charlotte Pipe’s new plant had its own concrete plant help pour what will be 35,000 cubic feet of concrete for the new headquarters.

Charlotte Pipe will have rail access, which Ponsheck said is how the plant receives raw materials like brake rotors to convert into pipe fittings. Sand and water are also recycled for reuse, he said, adding “all of our scrap we bring in is 100 percent recycled.”

The engineer said the new building will have more room for forklifts and other work vehicles, while employees will have locker rooms, break areas and showers to use before and after shifts.

Ponsheck said the plant will have “better air flow, better lighting, better everything.”

New buildings for Charlotte Pipe’s maintenance, service, electrical, quality control and environmental departments are also being built, as well as office space. The facility will also have a large storage area for all the products made by the plant and its own shipping office.