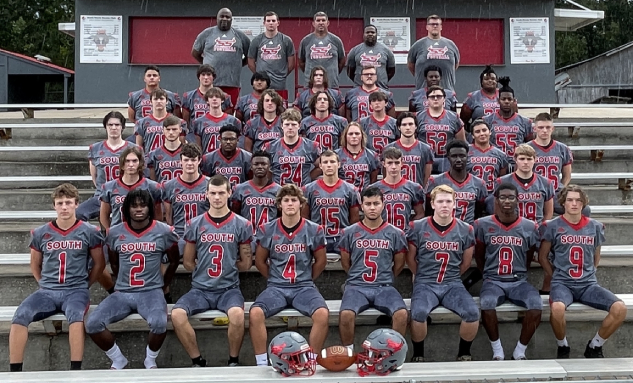 South Stanly’s football team has had its struggles in terms of wins and losses for several seasons.

The Rebel Bulls have not won a county title since 1989 and not had a winning season since 2018. South has also not won a playoff game in a decade, the last coming in 2012.

Here are five questions answered by Coach Ochier regarding the program and the upcoming season:

1) As you enter your fifth year of coaching South Stanly, how has the program developed from your first season in establishing what you want to achieve and do for the players, coaches and the community?

Currently we have one of the biggest team South Stanly has ever had at 66 players. One thing we’ve done to develop is just recruit the hallways and get kids interested in the sport. We have the talent to compete at South but getting them to participate and buy in was the issue; now that it is, gone we are able to move in the direction we want it.

We have developed an atmosphere that where the kids are competitive and we have a community that supports everything we do. This offseason, we really developed our strength and hit the weight room hard during school. Overall, we are stronger than South has ever been. This team really bought in to what we were doing; they enjoyed lifting and had fun in the weight room. It’s so great to see the results.

2) The team had just seven seniors last season but several of those players were in skill positions for South. Who for South, whether newcomer or veteran player, will be filling those roles?

A lot of our underclassmen have stepped up and taking over those rolls quite easily. Jaxon Barbee, Trevor Tucker, and Carson Lowder were three individuals did we rely on a lot last year but we’ve had several people take over those spots and I think we’re going to be better this year than we were last. It’s nice to have Drew Gaddy back at quarterback to resume his role as the offense of leader. And we have several skilled positions that are going to be taken over by younger players that have stepped up big-time this year not only on the field but in the weight room in the off-season. We have several sophomores that will be playing key roles in her offense. Braylon Tyson, Ethan Gaddy, Evan Kimrey, and Ryker Bowers will help lead the attack on our fence out of that sophomore class

3) Who are the team’s top returning players, what positions do they play and what will be expected of them this season?

Our offensive line this year will play a major role in leadership. Trevor Crump, Sawyer Huneycutt, Aiden Wilson, Tyler Foreman, and Henry Morris have made huge adjustments in the offseason, not only with their strength but their foot work in their size.

Of course Drew Gaddy being back at quarterback will play a major role in what we do offensively. On defense, we will be led by All-Conference players Ethan Gaddy and Peyton Gentry at the linebacker spots.

4) Who are the newcomers to South’s football team who will play big roles?

Several people have stepped up and are going to make huge impacts on offense and defense.

Joe Misenheimer has played his support role over the last couple years but now it is his turn to take over in the defense of back field.

Keith Murphy will be spending a lot of time on both sides of the ball . His 6’5″ frame is going to be hard to defend as a receiver and he is going to be faster than most of the offensive lineman he plays against as a defensive end.

5) What is your team’s outlook for the season to compete in county, in the YVC and overall?

It’s time for us to get the monkey off our back and show the rest of the county that we belong and we need to be respected like everybody else.

Our conference is going to be tough but I think we’re going to fare pretty well. There’s a wide variety of skill in the YVC. We looked to be a major part of that this year.

Our overall schedule is a challenge. We only play three A schools all year long. I wanted to challenge our team and I tell them if you want to be the best you’ve got to beat the best.

Home games are listed in bold. Games with a * are conference games.

* YVC Games
All Games start at 7:30 p.m. unless otherwise indicated.