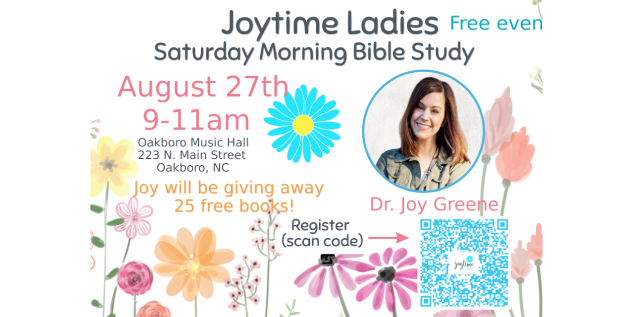 For one Stanly County native, finding the right prescription for women’s spiritual health has grown into a full-time ministry reaching women worldwide.

Dr. Joy Greene, who was born and raised in the western end of Stanly, will return for a breakfast event and Bible study at 9 a.m. Aug. 27 at Oakboro Music Hall. The event will be capped at 100 participants.

A former pharmacist at the hospital and Moose Pharmacy in Midland, Greene’s JoyTime Ministries, celebrating its 10th anniversary, reaches radio listeners on thousands of radio stations across the world with her daily minute-long devotionals. Her devotionals on social media, including more than 60,000 Facebook followers and 23.4K on Instagram, enjoy her artfully designed posts with inspirational Bible quotes.

Greene has also written a new book of 31 devotionals for women with room for guided journaling, available on Amazon in hardcover and paperback. At the upcoming event, 25 attendees will receive a free copy of Greene’s new book.

“I have a wonderful group of women across the world that connect with me online,” Greene said.

The ministry posts a devotional on social media three times each week, and many women said to Greene they wished they could get the devotionals in a book, which is how the book came about.

JoyTime Ministries started when the Greene family moved to Jackson, Tennessee when Greene was going to be a pharmacy professor at Union University. The father of one of Greene’s friends worked for the local Christian radio station, came down with the flu and needed someone to go on the air.

“I rearranged my teaching schedule and I went into the radio station. I was his guest for an hour and we talked about the things the Lord has done in my life,” Greene said.

The radio station’s general manager told Greene he liked her voice on the radio and asked if she could pre-record a devotional. Her efforts turned into JoyTime Ministries.

She credits a friendship with Mike Weaver of the Christian band Big Daddy Weave as also having helped build the ministry. The two groups have done many events together, she said, which helped to grow the radio network.

Greene continues to teach full-time as well as continue to grow the ministry, which she said has taken a lot of “encouragement and perseverance to know that this is what God’s called me to do. He enables you to do it; He gives you the time and people you need.”

She added it was important to her to celebrate the 10th anniversary of the ministry by coming home to Stanly for an event.

“I love my hometown; you just don’t find better people than in Stanly County. I’m grateful for their love and support.”

Greene married her childhood sweetheart, Bryan, whom she met while she was a freshman and he a junior at West Stanly. The two have been married for 25 years and have two children: Ellie, a student at Appalachian State, and Sam, a senior in high school. The family lives in Trinity.