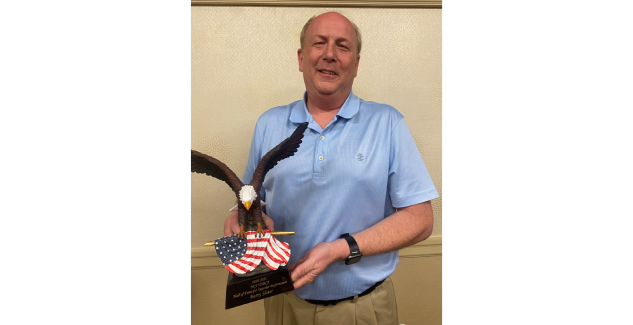 Barry Slater, who lives in Locust, was recently inducted into the North Carolina State Bowling Association's Hall of Fame. (Contributed)

Barry Slater could be found years ago knocking bowling pins down 10 at a time at the former Dogwood Lanes in Albemarle, and he can still be found competing on the lanes.

Recently, his efforts on the lanes throughout his career earned him a state honor.

Slater, who lives in Locust with his wife, Connie, was honored with induction in the North Carolina Bowling Hall of Fame for Superior Performance.

He was inducted in 2021 but COVID postponed the ceremony until this year when he was honored for his efforts.

Slater has been a member of the Professional Bowlers Association since 1989 and competed for about 15 to 18 years, eventually bowling against many tour stars in later years.

“Bowling side-by-side with (PBA bowlers) was so cool because I grew up watching them on TV,” Slater said.

He has reached the ultimate bowling achievement of throwing a perfect 300 game 19 times. He was the 2019-20 North Carolina state USBC Master’s champion and was a member of the state’s men’s tournament team, which was ranked in the nation’s top five.

Slater was also named to the Greater Charlotte Bowling Hall of Fame in the 2017-18 season.

Having bowled since he was 5 or 6, Slater said his parents and both sets of grandparents also bowled.

“I guess I got it naturally,” he said, adding one of his grandfathers managed a bowling alley in Gastonia. Bowling there, he added, “is my first memory of throwing the ball down the lane. It actually got more competitive when we moved to Japan.”

The son of military parents, Slater first joined a league in Japan in 1968 at the bantam, or youngest, age group, going up from juniors to seniors.

The move to Stanly came when his father retired and bought Norwood Camping on Lake Tillery around 1978.

He bowled at the local alley until the late 1980s when he started competing in Charlotte at Carolina Lanes in Matthews and Pappas Park Lanes.

Some of his favorite times with the PBA, he noted, were sitting in the locker rooms and listening to all-time greats like Parker Bohn III, Walter Ray Williams Jr. and Pete Weber share stories.

Back then, to join the PBA, one had to average 200 or better in two different leagues for a certain number of games.

Slater bowled about eight to 10 local tournaments a year but did not join the regular traveling tour.

The game, he said, has changed since he bowled with urethane bowling balls in Albemarle, which are used on TV now for spares.

Slater continues to bowl and competed in this year’s USBC Masters in Las Vegas.