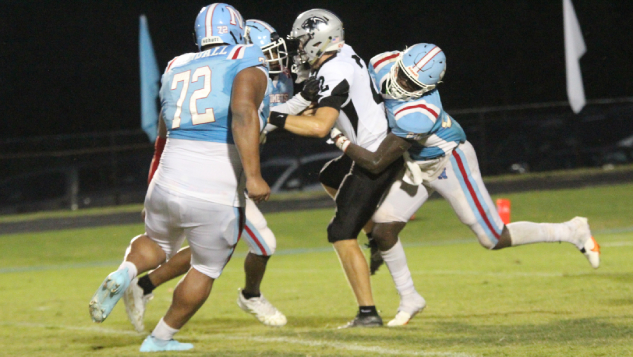 The history of football between North Stanly and Ledford high schools goes back many years, to a time when both teams were part of the same conference.

Before last season, when the two teams started the first of a two-year non-conference series, the Comets and Panthers had not played since 2000. Ledford topped North four times in conference play, and won last year 20-14.

North hosted Ledford Thursday night, moving the game up to avoid predicted heavy rains for Friday, but the Panthers’ offense brought a storm of its own. Ledford scored on the team’s first offensive play from scrimmage and never trailed, earning a 41-14 win over the Comets.

Junior running back Alex Sanford was a weather system of his own for Ledford (1-0), rushing for 254 yards on 11 carries with four touchdowns. Three of his scoring runs were all more than 60 yards from scrimmage.

The Panthers averaged 10.7 yards per carry in the game, finishing with 277 net yards on the ground. Ledford quarterback Nathan Carr was 5-of-11 for 56 yards, including a touchdown pass in the second quarter.

North (0-1) had a few lightning strikes as well. B.A. Harris returned an 80-yard kickoff for a touchdown while senior running back Cam Smith had 123 rushing yards on 20 carries. Smith came within two yards of his own touchdown but suffered leg cramps on the next play. Smith’s efforts set up a short touchdown run by Brody Conner in the fourth quarter.

On the defensive side, NCAA Div. I prospect D.J. Watkins had three sacks for the Comets.

“I was proud of how we handled our composure,” North head coach Scott Crisco said. “We got busted in the mouth in the first series, and I thought we responded well. We kept our heads up and stayed together as a team.”

Regarding Ledford, Crisco said, “I told the team, ‘That was a better team than us tonight. They were the all-around better team.’ Sometimes, you just have to say that.”

Crisco said Smith “showed me something tonight,” adding the Comets “had some good things to build on” for this season.

North goes on a two-game road trip starting next Friday at East Rowan. The Comets then travel Sept. 2 to take on a former conference rival, North Rowan.