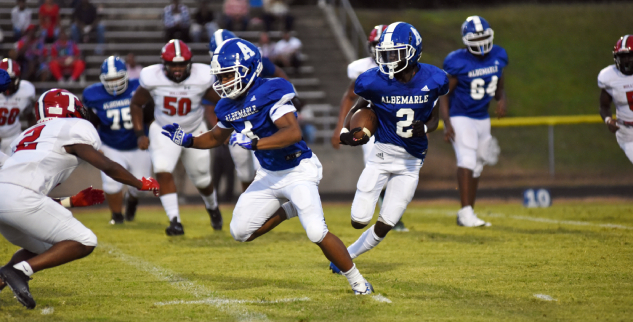 Albemarle running back C.J. Ellis gets a block from Kaine McLendon (No. 4) in Friday's home agame against Thomasville. (Photo contributed by Starla Whitley)

The varsity football series between the royal blue-clad Albemarle Bulldogs and the visiting Thomasville Bulldogs in white and red saw another round Friday night at Albemarle’s football stadium.

Thomasville took the opening kickoff and drove to take a lead it would not relinquish, earning a 14-0 win over Albemarle.

Thomasville drove the field after receiving the opening kickoff and returning the ball to the Thomasville 45. The visitors drove 55 yards in four plays, capped off by a nine-yard touchdown run by Namuire Peake. Thomasville missed the extra point, but led 6-0 early.

Albemarle had a bad snap on a punt on the team’s first possession, and Thomasville nearly scored on the short field, but Albemarle’s defense stopped Thomasville at the 10-yard line.

Thomasville added a safety in the second quarter after pinning Albemarle deep with a punt. It took an 8-0 lead into the locker room at halftime.

The visitors started the drive at the Albemarle 44, and drove the length in eight plays, including a long pass from Charles Norman to set up a short Peake touchdown run. The two-point conversion failed, leaving the score 14-0.

Albemarle will go on the road Friday night to take on county rival West Stanly (1-0).