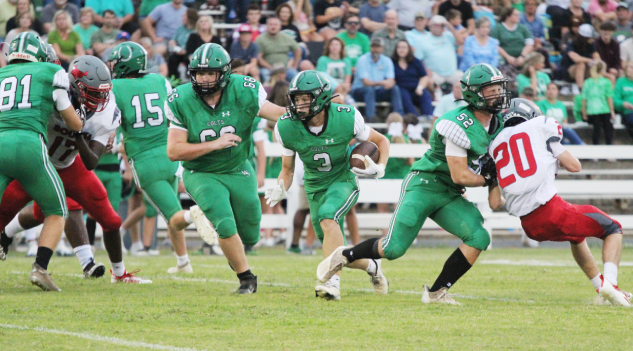 West's Matthew Parker (No. 3) gets good blocking from the offensive line, including Zak Bonderak (No. 81) and pulling guard Owen Grismer (No. 66) in Friday's win over South Stanly. (Photo by Charles Curcio/staff)

Hosting South Friday, West took advantage of turnovers and mistakes to stretch the win streak over South to nine with a 45-0.

The shutout for West (1-0) was the third time the Colts blanked South Stanly in the last nine years. The shutout was also the first since the shortened 2020 season.

The Colts limited the Bulls (0-1) to 37 total net yards of offense and three first downs, two of which came on penalties.

West running backs Matthew Parker and Shane Mecimore scored two rushing touchdowns each as the Colts finished with 221 net yards on 26 carries, averaging 8.5 yards per rush. Mecimore finished with 112 yards on just four carries including a 59-yard scamper to the end zone, while Parker added 84 yards on nine carries.

The Colts also got passing touchdowns from starting quarterback Carson Morton and backup Jett Thomas. Both TD passes were hauled in by West wideout J.T. Barbee.

South lost two fumbles in the game and had a bad snap on a punt deep in the Bulls’ territory which set up a short scoring drive. The Bulls also were whistled for 97 yards on 11 penalties, while West had four penalties for 50 yards.

“I just give credit to all the linemen out there,” Parker said about the West running game. “They contribute a lot. I just follow the players and run.”

Parker’s first touchdown saw the senior get out in the open field in a one-on-one situation with a South defender. Parker faked and got past the defender en route to the end zone.

“I just try to be a little shifty sometimes,” Parker said. “I’m looking at the end zone; that’s what I’m doing.”

West head coach Brett Morton said converting turnovers and mistakes “is Football 101. If you can force turnovers and capitalize, normally you’ll have a good night. We worked and worked to generate more opportunities for us to get the ball and it paid off tonight.”

The Colts coach added West executed well on offense in the first half and said the defense “had a good night,” adding the West defenders “got off the ball fast and read their keys well.”

Morton recalled not being able to play the team’s first two home games last season because of COVID restrictions, saying opening with a big win like West did Friday “means everything to start as fast as we did and capitalize on the momentum moving forward.”

The second of West’s three county games this season will be right back at Larry Wagner Field this Friday when the Colts host Albemarle (0-1). The Bulldogs lost 14-0 at home Friday night to Thomasville.