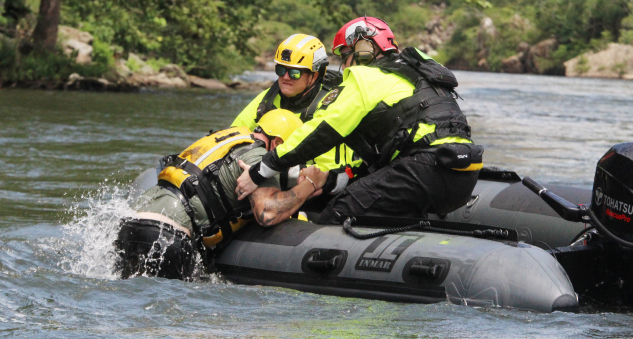 Jared Ingram, left, acting as a victim of a boating accident, is pulled into the rescue boat by Bryson Baucom and Dakota Raborn during the recent water rescue training exercises on the Yadkin River. (Photo by Charles Curcio/staff)

The rushing waters coming from the dam saw swimmers along with a mannequin pose as victims of boating accidents.

Union County officials assisted the training by providing a mobile tactical unit which helped coordinate the communications and debriefings from each exercise.

Stanly 911 Director Kyle Griffin and Stanly EMS Director Michael Roark, along with other local supervisors, provided feedback for their departments after each evolution.

Griffin said for his department he would “evaluate how the telecommunicators handle the stress.” He added other staff would evaluate patient care from the EMS and water rescue aspects.

Roark said the departments are required each year to do tactical standard operating procedure (TSOP) tests.

“It’s a requirement for our folks to come in and (do) a functional skilled exercise to help practice their skills they may not get to do every shift based on the calls that come in,” Roark said. “It gives us all a chance to practice those skills. It also allows us the interoperability of working with different agencies that we may not work with on a daily basis, specifically with this aspect of water rescue.”

Roark said along with medical care from a medic’s standpoint, the exercises would evaluate “command and control responsibilities of actually running an incident with multiple moving parts.”