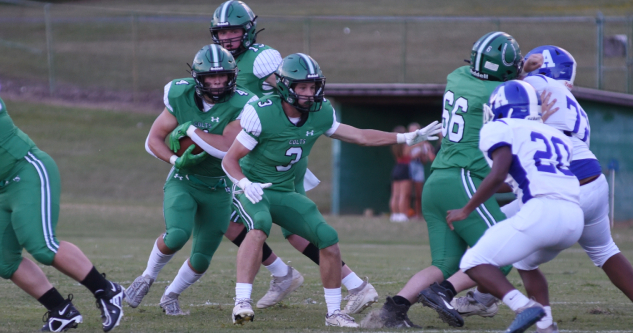 West Stanly's Shane Mecimore (No. 4) gets a lead block from Matthew Parker (No. 3) and the West offensive line in Friday's win versus Albemarle. (Photo Contributed by Starla Whitley)

One feature of a ground-oriented football offense, when a team can get four and five yards per carry, is the ability to keep the opponents’ offense off the field.

In Friday’s varsity football game between host West Stanly and visiting Albemarle, the Colts did just that in a 18-6 win.

The Colts rushed for 256 net yards in the win, with Shane Mecimore leading the way with 120 yards on 26 carries and a touchdown.

Near the end of a scoreless first quarter, Albemarle fumbled on its 15 yard line. It was recovered by the Colts’ Nathan Snellings.

West then took six plays going into the second quarter to put the first points on the board, a Morton one-yard plunge.

During Albemarle’s ensuing possession, the game was delayed with just over eight minutes left in the half by lightning.

After a 45-minute delay, West’s defense stopped the Bulldogs, then the Colts drove 74 yards in 13 plays to take 6:57 off the clock. It was capped with Mecimore’s two-yard TD run.

“We had a little delay with the rain, but we came back out and realized it was time to go,” Barbee said.

Albemarle threatened to score on the opening drive of the second half but the drive stalled at the West 6. The Colts then scored nine plays later, capping the 94-yard drive with Morton’s TD pass to Barbee.

The Bulldogs’ only points in the game came on the visitors’ next play from scrimmage. Senior C.J. Ellis took a jet sweep and ran 71 yards for the score.

“We came in and realized they were doing everything that we practiced the whole week for,” Morton said. “We saw kind of a weak spot on their line and we attacked straight from there.”

West’s QB said wideout Barbee “was a special kid,” adding the senior playing in his first year “made a big improvement in the weight room. It’s really just all up to him. He goes out there, I throw it and he catches it and takes it to the house.”

Both Morton and Mecimore gave credit to the offensive line for the win, with Mecimore saying West “had momentum from the word go” after the weather delay.

West head coach Brett Morton said “we came out of the rain delay on fire, which I hoped we would do…I’ve been on both ends of the spectrum where you come out of a rain delay and do well or come out and fall flat.”

Coach Morton said the team’s run-oriented offensive system is designed to “keep the ball, chew the clock up, score and minimize the possessions of the other team.”

West will be on the road the next three weeks of the season, including this Friday to meet former Rocky River Conference rival Mount Pleasant. The Tigers are 2-0 with wins over Central Cabarrus (35-14) and Carson (34-28).

The Colts also travel to North Stanly Sept. 9 with a chance to win the Stanly Cup having posted wins over South Stanly and Albemarle.

“We didn’t get to play those two games last season,” Morton said about the next two games. “We were 2-0 going into those two games (last year)…I don’t know if it gives it more importance because we didn’t get them to play. I just think everybody is looking forward to hopefully not miss any games because of COVID or anything else.”

“I love our effort. We just have to do a better job executing,” Albemarle head coach Richard Davis said about Friday’s game. “Like I told (the team), we are just a few plays away…our season is going to be dictated by how we react to this loss. We have two choices: we can let it break us apart or we stay together and work hard.”