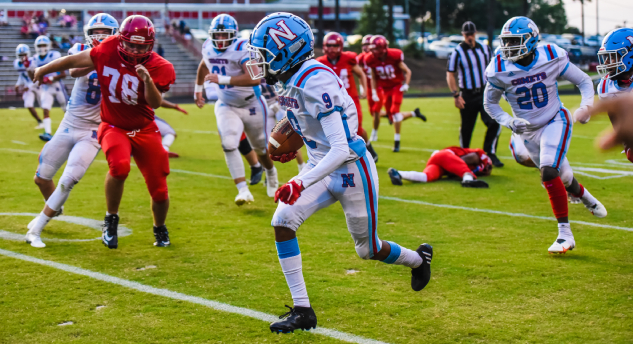 In high school varsity football games Friday night, North Stanly went just down the road to Granite Quarry to face the 3A East Rowan Mustangs while South Stanly was at home against another 3A school, Southwestern Randolph.

The Comets got points on the board from many places, evening the team’s record at 1-1 with the road win over the Mustangs.

Later, Gavyn Covington intercepted a pass and returned it 70 yards for a touchdown, putting North up 13-0 after a missed PAT.

A bad punt snap led to the first touchdown of the game for East Rowan (0-2), but North answered. Cam Smith broke off a 25-yard touchdown run, with a two-point conversion putting North up 21-7.

With 1:47 left in the first half, the Mustangs cut the lead to seven with a touchdown.

After a scoreless third quarter, Jay Jackson had a pick-six of his own. The extra point put North back up by 14 points, 28-14.

North also added a safety with 2:51 left in the game.

“We started out slow on offense,” North Stanly head coach Scott Crisco said. “But our defense stepped up and kept us in the game. Only giving up one score and scoring 23 of our points was huge.”

Crisco said he was “proud of the way we responded in the fourth quarter. Our staff did an excellent job of keeping our players focused late in the game.”

The Comets face former conference opponent North Rowan Friday night on the road. North Rowan shut out South Rowan 57-0 to improve to 2-0 on the season.

The Bulls fell to 0-2 on the season as the visiting Cougars built a lead early and never trailed.

Cougars QB Easton Clapp found Adam Cole on the team’s second offensive play of the game for a 32-yard touchdown pass. A two-point conversion put the visitors up 8-0.

South got a first down on its first drive of the game but went for a fake punt on the next set of downs and turned the ball over.

Southwestern again went to the air as Clapp found Sean Adkins for a 16-yard TD pass. 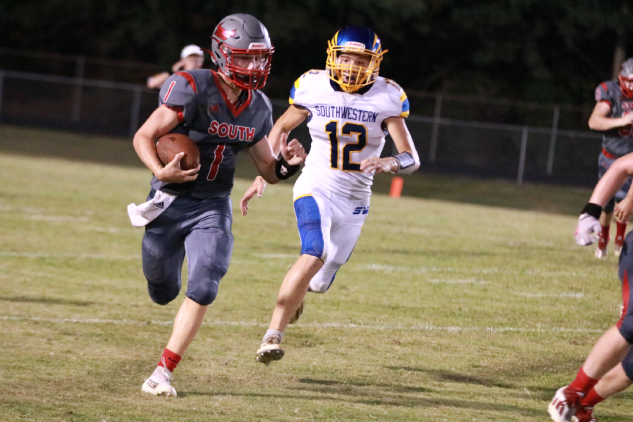 After a South Stanly three-and-out, Clapp found Cole for a 23-yard touchdown pass in the middle of the field.

Cole and Asher Perkins added rushing touchdowns in the second quarter for the Cougars, then a Cole punt return for a touchdown gave the visitors a 42-point lead, which Southwestern had during halftime.

With a running clock in the second half, South Stanly got on the board. Bulls quarterback Drew Gaddy threw a perfect strike to the left corner of the end zone over two defenders for Ezra Powe, who hauled in the 26-yard pass for a TD.

Southwestern Randolph added a 65-yard rushing touchdown from Clapp to make the score 49-6, but South answered with a six-yard TD pass from Gaddy to Tristan Patterson.