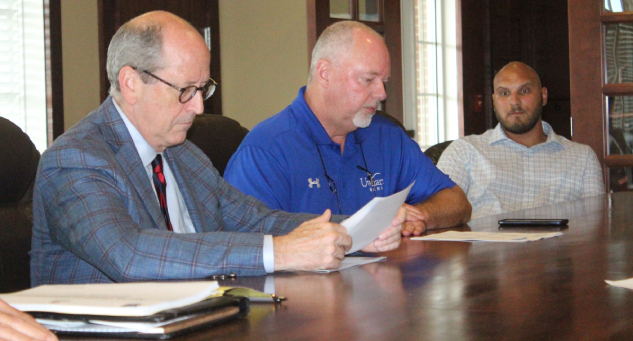 U. S. Congressman Dan Bishop (R-9th) reviews a handout regarding the Stanly County Airport with Airport Authority Chairman Mike Harwood at a recent meeting at the airport. (Photo by Charles Curcio/staff)

The Stanly County Airport has been one feature of the county which companies and visitors use frequently throughout the year.

Last Monday, Congressman Dan Bishop (R-9th), who is running for the newly-redrawn N.C. 8th District, visited the Stanly County Airport and took a tour of the facilities.

Bishop was joined by James Estes, a constituent advocate representing North Carolina Sen. Thom Tillis, and other state officials to learn more about the airport’s place in the county and region.

Mark Tyler, the chief operating officer for the North Carolina Department of Insurance, along with certification specialist Greg Palmer from the state fire marshal’s office, made a presentation to Bishop about the proposed improvements to a training area at the airport.

Col. Marshal Haylett, commander of the 145th Operations Group with the N.C. Air National Guard, also spoke at the briefing.

At the briefing, Harwood said the airport is part of the “central park of North Carolina” and added the state’s Air National Guard “has been a big part of here for a long time.”

Bishop spoke about having spent the day in Stanly, including having met with county staff and Badin town officials, along with lunch with Sheriff Jeff Crisco.

“I can’t be any good to anybody as a member of Congress unless I’ve gotten to know you. It’s a little time, but I’m glad to be here,” Bishop said.

Swaringen said Stanly’s airport, one of 62 general aviation airports in North Carolina, is unique because of the two runways. He said the airport, like others around the state, need more hangars.

The airport director also mentioned work needed for a taxiway into an area for new corporate hangars.

Swaringen said the airport is one of the few in the state with an active FEMA plan for help with local and regional disasters.

Showing photos of proposed improvements to the Air National Guard’s facilities, Haylett said the civil engineering and training site which trains for rapid runway repair has more than 2,000 students per year.

The base has 65 full-time staff members, but on a drill weekend, Haylett said, more than 350 people are on site.

“That means restaurants, hotels, all that sort of stuff…the 2,000 students per year come from all over the southeastern United States,” Haylett said.

When the Guard flew C-130s, he added, Stanly was the main training facility, but now that the guard flies C-17s, which is a bigger airplane with more weight restrictions, the Guard can not do as much at Stanly’s airport.

However, the Guard can still use the airport to “mimic what we would see in a tactical environment,” Haylett said.

Powell spoke about the airport’s advanced emergency training facilities, saying the current facility is unique and could be one of the best in the country.

“It can be a big draw,” Powell said, noting the informal relationship between the Guard, Stanly County and the Department of Insurance. “We’re partnering together to make sure the facilities we will build here with the money we’ve been given will be unique.”

The $31 million in funds for the training facilities was secured when former representative Robin Hayes was in office, Bishop noted.

Palmer said the “two big-ticket items” that are in the forefront are a water-training facility and the airport rescue/firefighter training areas, to the side of the Guard base.

He added a large pond area and a channel for swift-water rescue would also be part of the project.

State Fire Marshal Brian Taylor, Powell said, along with Congressman Richard Hudson (R-8th), are advocating for an additional $25 million “to round out that vision” for the new facilities.

The water rescue facility’s channel would be built similarly to what exists at the U.S. National Whitewater Center.