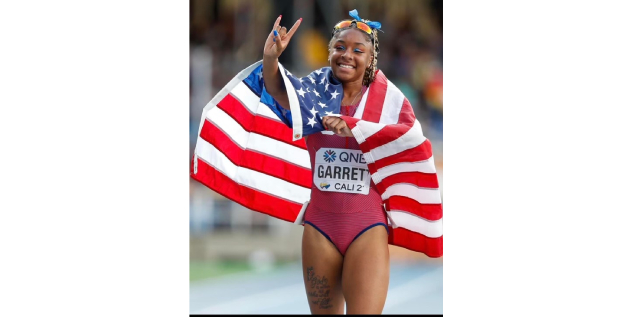 Akala Garrett celebrates her win at the U20 World Championships in Cali, Colombia. She has enrolled for her senior year at Albemarle High School. (Photo Contributed)

Albemarle’s women’s track team won the 1A Midwest Regional and finished 10th at the 1A state meet last season, but an addition this spring lifts the Bulldogs into state championship contenders.

Last Thursday, the Stanly County Board of Education approved the transfer of world-champion hurdler Akala Garrett to Albemarle for her senior year.

The new Albemarle senior this summer was the youngest of Team USA competing in the recent World U20 Championships in Colombia, where she took first place in the 400-meter hurdles (56.16 seconds) over Sweden’s Hannah Karlsson (56.71).

She was also a member of the first-place 4×400 meter relay team, along with Roisin Willis, Mekenze Kelley and Shawnti Jackson. Team USA finished in 3:28.06, close to four seconds faster than second place Jamaica (3:31.59).

Garrett has won eight 4A state championships in three years at Harding University High School in Charlotte, in the indoor and outdoor track seasons. She has the all-time third fastest mark in the 55-meter indoor hurdles (8.39 seconds) along with the second-best times in outdoor track in the 100-meter (13.33), 300-meter (40.62) and 400-meter (56.16) hurdles.

She is also the two-time Gatorade Athlete of the Year for North Carolina in women’s track.

The Olympic hopeful joins her mother, LaSonja Collins, the first dean of students at AHS, who said her daughter was “so excited” for her first day of school Monday at Albemarle.

Collins is Garrett’s track coach, having coached her at Harding and for Team USA. She said the great thing about her daughter being at Albemarle on the academic side is being able to take dual-credit courses which earn her college credit.

Garrett has already bested her mother, herself a standout track athlete when she was at Independence. She said Garrett’s level of talent “is way better than I was.”

When acknowledging that her daughter’s best time at the 300-meter hurdles bumped her own off the list of best performances ever in NCHSAA history, Collins said they joked about it.

” ‘Ah, I’ve finally beat you at something,’ ”  Collins said her daughter said to her. “So we’re definitely competing all the time.”

She said she plans to coach the Bulldogs’ women’s track team.

“I’m excited to be able to work with them and bring them to another level,” Collins said.

Referring to coaching with TEAM USA, she added, “I got an opportunity to work with a lot of great athletes and just share my skill set with a lot of people, so I’m excited to be able to bring that to Stanly County.”

Collins said she hopes to host some track clinics as well.

Regarding her first day at Albemarle, Garrett said, “It was really fun. Everybody was so sweet and very welcoming.”

She added she was looking forward to the track season and “doing some great things…I want to bring good energy and a state title.”