STANLY FOOTBALL: South Stanly at home, three others on the road 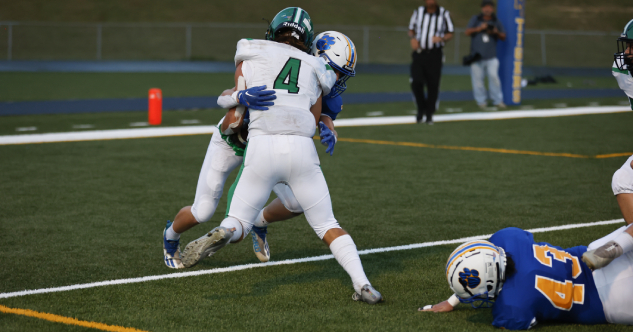 West Stanly's Shane Mecimore (No. 4) fights a Mount Pleasant defender to get across the goal line for the first of his two touchdowns in the game. (Photo contributed by Earl Bradshaw)

In high school varsity football games Friday night, South Stanly was at home against 3A Carson while Albemarle, North Stanly and West Stanly were all on the road with non-conference matchups.

The 60th meeting between the two rival schools took place as the Tigers hosted the Colts, having won the previous 10 meetings in a row.

However, West’s defense came with some late fourth-quarter heroics and led the Colts (3-0) to a 21-20 victory.

Instead of tying the game with an extra point, the Tigers went for two. Moose tried the left side of the line, then spun to avoid West tacklers.

However, the Colts’ Jacob Starnes and Matthew Parker stopped Moose from crossing the goal line.

Earlier in the game, Shane Mecimore put West up 7-0 with 3:19 left in the first quarter, and the Colts continued to lead until a 22-yard Moose TD run with four minutes left in the second got the Tigers within a point, 7-6.

Quarterback Carson Morton added a third-quarter touchdown to put West up 14-6, but the Tigers tied the game in the fourth with 7:57 left on a Lawson Little touchdown run and a Moose two-point conversion.

Mecimore gave West the lead several minutes later with his second rushing score of the game.

“What made the difference tonight was our guys being resilient,” West head coach Brett Morton said. “They fought hard all game. They played for each other and kept coming up with plays when we needed them. Our guys showed a lot of grit and heart, and found a way to win a tough football game.”

Morton said it was awesome to end the losing streak to Mount, adding, “it speaks a lot about how much the guys have worked to improve and how much they believe in each other.”

The Colts are off to a 3-0 start for the first time since the abbreviated 2020 season. West also won the first eight games of the 2019 campaign.

West Stanly goes for the Stanly Cup this Friday when the Colts travel to New London to take on North Stanly (1-2).

After winning last season in Albemarle 34-21, the 2A Warhorses hosted Albemarle Friday night.

Albemarle’s defense forced six turnovers in the game and gave the Bulldogs short fields on which to work. The visitors broke a 12-12 tie to score 45 unanswered points in a 57-12 blowout.

Jaylen Pinkney set up the first touchdown for Albemarle (1-2) with an interception and return to the Owen 5-yard line. C.J. Ellis put the Bulldogs up 6-0 early.

Malik Watkins scored a rushing touchdown with 9:02 left in the second quarter to put Albemarle up 12-6.

Owen answered three minutes later with a 54-yard TD run which proved to be the team’s final points of the night.

Zyion Geiger hauled in a 12-yard TD pass from quarterback Dre Davis to put Albemarle up for good with 3:04 left in the first half, 18-12.

Pinkney struck again in the second half with a 55-yard interception return for a touchdown, putting Albemarle up 25-12.

Vincent Gregory then forced a fumble to set up a 21-yard TD run for Davis with 4:45 left in the third.

On the ensuing kickoff, Owen fumbled and Pinkney recovered the ball, which set up a Kaine McClendon 12-yard TD run, making it 38-12.

Garrie Rivers then picked off an Owen pass which set up an Ander Artis to Geiger seven-yard TD pass and a 45-12 score with 1:14 left in the third.

Albemarle scored twice more in the fourth, including a 13-yard reverse from Ellis, for the game’s final score.

The Bulldogs had not scored 50 or more points since beating South Davidson 60-6 in 2019.

Albemarle head coach Richard Davis said the result was a “much needed win and it’s great for the guys’ confidence. We had great balance on offense, and defense played well…it really helps when the defense gives the offense the ball on short fields.”

Fighting a rash of injuries as well as facing the team’s third straight opponent from a higher classification, the first three weeks have been difficult for the Rebel Bulls.

South’s defense allowed the Cougars four times as many yards as the Bulls’ offense gained as the visitors broke the game open in the middle two quarters for a 47-0 win.

Carson (1-2) gained 447 total yards of offense and allowed South 107 net offensive yards. Quarterback Michael Guiton was 10-for-14 through the air for 173 yards and two touchdowns, while the ground game averaged 9.8 yards per carry finishing with 254 yards on 26 carries.

South was inside the Carson 30-yard line three times in the game but could not put points on the board. Bulls QB Drew Gaddy led with 54 net rushing yards but was just 1-for-10 through the air for (-6) net yards with one interception.

It’s the second time South has been shutout this season; the Bulls have been outscored 140-13 overall in 2022.

“We haven’t had a problem moving the ball all year,” South head coach Ryan Ochier said. “We moved it on West (Stanly). We moved it on Southwestern Randolph, and we moved it tonight. We just have to find that finishing touch to get in the end zone.”

Regarding South’s injuries, Ochier said, “we started out with 12 offensive lineman this year. We are down to five.”

He added South switched back to last year’s defense, which Ochier said the kids responded to well, forcing some early punts in the game.

“I thought we were able to slow them down early,” Ochier said.

South Stanly will host fellow 1A classification and former conference opponent South Davidson (2-1) Friday. The Wildcats opened the season with wins over North Stokes (22-21) and Chatham Central (14-0) before losing Friday to North Moore 35-0.

North Stanly’s winning seasons over the last nine years have meant the Comets rarely have been in a game with a running clock with which they were not on the winning side.

With the Cavaliers scoring six touchdowns in the first half, North Stanly was on the other side this time, suffering a 49-0 road loss.

The clock ran continuously in the second half after North Rowan (3-0) scored 20 points in the first quarter and 22 in the second.

The loss for the Comets was the team’s third in the last four games against the Cavaliers, and the largest margin of defeat to North Rowan in the 24-game history between the two schools. North Rowan leads the all-time series 17-7.

The Comets face the team’s first county opponent Friday when North hosts West Stanly with the Stanly Cup on the line for the Colts.