North's Cam Smith (No. 5) had five touchdowns in the Comets' 40-34 road win Friday at Randleman. (Photo courtesy of Dawn Lucas) 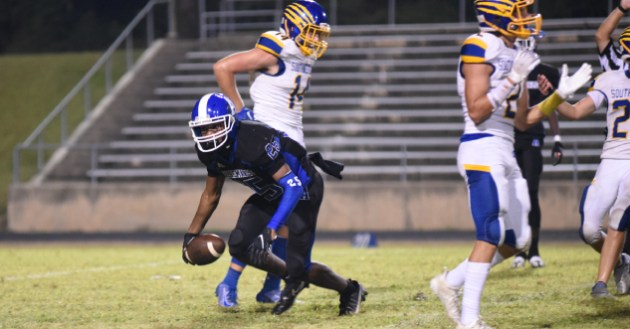 In high school football games Friday night, Albemarle hosted the Southwestern Randolph Cougars, while North, South and West Stanly all were on the road in non-conference games.

Senior running back Cam Smith had another big game for the Comets in Friday night’s game after scoring the winning touchdown the week before.

Smith scored five rushing touchdowns for North, including the go ahead midway through the fourth and a 44-yard run in the final four minutes, giving the Comets a two-score advantage late en route to the 40-34 win. Smith, a senior, finished with 210 rushing yards and 79 receiving yards.

North Stanly quarterback Chance Blake threw for more than 200 yards in the win for North (3-2), the school’s first football win over Randleman after four previous losses to the Tigers.

Christian Long scored on a one-yard keeper for Randleman (3-2) to make it a one-score game with 48.9 seconds left. On the ensuing kickoff, the Tigers went for an onside kick, but Colson Palmer recovered for the Comets. North then ran out the clock for the win.

Along with Smith’s touchdowns, Blake found Gavyn Covington for a 20-yard touchdown pass in the second quarter when Randleman was up by 14, its biggest lead of the game.

“I couldn’t be more proud of our guys tonight,” North head coach Scott Crisco said. “We went down 14-0 early but never put our heads down. This team believes in each other and that’s why we don’t give up.”

Regarding Smith’s efforts, Crisco said the senior “had another great game. The kid just won’t go down on first contact. He is running on a different level this year. He and our entire team are playing with a chip on their shoulders. The good news is we haven’t peaked yet.”

North Stanly will be off until Sept. 30 when the Comets open Yadkin Valley Conference play at home against Union Academy. The Cardinals (1-4) lost 32-0 at home to Lake Norman Charter Friday night.

The Bulldogs’ defense put in another solid effort in the game, but Albemarle struggled to find points in a non-conference loss to the Cougars.

Albemarle (1-4) has limited teams to an average this season of 17 points per game, and no opponent has scored more than 21.

Trailing 14-0 in the game after one quarter, Albemarle cut the lead in half in the second when Dre Davis found Jaylen Pinkney for a nine-yard touchdown pass. The extra point got the hosts within seven points, 14-7.

The Cougars added a late touchdown in the fourth for the game’s outcome.

“We didn’t defend the quarterback run as well as I would have liked,” Bulldogs head coach Richard Davis said. “(It was) hard to sustain offense when you’re shooting yourself in the foot and behind the sticks.”

Albemarle will have a bye this week and will open Yadkin Valley Conference play Sept. 30 at home versus Jay M. Robinson (4-1). Robinson wrapped up its non-conference schedule with a 29-28 win over Cuthbertson in overtime Friday night.

The Colts, battling injuries this week, kept Friday’s road game close with the Grizzlies but fell in the end by 12 points.

For West (3-2) it was the team’s second straight loss after winning three straight to open the season.

Oak Grove (5-0) led 7-0 after one quarter, but a 15-play scoring drive for West capped by a six-yard TD run from Rene Salazar pulled the Colts within one point at 7-6.

The Grizzlies added a touchdown, then knocked home a 41-yard field goal as the first-half clock ran out, giving the hosts a 17-6 halftime lead.

Oak Grove maintained the lead for the rest of the game, adding a late touchdown.

West answered with a 44-yard touchdown run by Shane Mecimore with just over 90 seconds left on the clock. West went for an onside kick, but the Grizzlies recovered and ran out the clock.

“The guys really played hard,” West head coach Brett Morton said. “We had a lot of adversity to fight through with injuries. I’m proud of the way they stepped up and played.”

West Stanly returns home Friday to host Eastern Randolph (3-1). The Wildcats have won three in a row, including in the team’s last game — a 28-21 win at Williams Sept. 9.

South’s numbers because of injury continue to dwindle this season as the Bulls suffered a 69-point margin of defeat, which is tied for the third biggest loss all time for the Bulls (0-5).

The loss was the largest for South since losing 70-0 to Albemarle in 2004, before the 42-point running-clock rule was put in place.

The Bulls will be off until Sept. 30 when South opens Yadkin Valley Conference play at Mount Pleasant (3-2). The Tigers won Friday night 30-7 at Anson County.