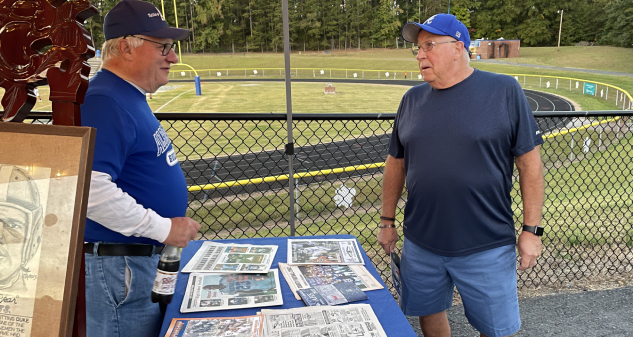 The Albemarle High School football program celebrated 100 years of its existence on Friday.

Albemarle has had a team since the 1922 season when the Bulldogs program was created. The program evolved into one of the most successful in the history of the state’s high school athletics.

Albemarle’s first game in the school’s history did not take place in pristine conditions.

According to a report from the Stanly News Herald written by Charlie McSwain, it was “a cold and rainy day” and the field “turned to mud.”

Landis took the early lead after an Albemarle fumble, 6-0, but the locals got a turnover of their own. Captain Marbry intercepted a pass and returned it to the Landis 5-yard line. Albemarle then scored on the drive to tie the game, 6-6.

With efforts from players named Huneycutt, C. Efird and Feagin, Albemarle took a 12-6 lead into halftime.

Landis rallied to tie the game, 12-12, which is where the score stayed until the fourth quarter.

Albemarle took the first kickoff of the fourth and drove for a touchdown, with Huneycutt’s extra point giving the hosts the lead for good, 19-12.

“The Albemarle team was considered the heavier, yet the experience and fake passes of Landis’ team helped to make the game more interesting, they having more experience than the locals. But the game would have been intensely interesting, or rather intensely funny, had there been no deeds of greatness performed on the field for it must be remembered that Edwards Hinson and Tom Kennedy were there. The former had only to fall upon an enemy and there would be no more heard from the unfortunate.”

In the first season, Albemarle beat Landis again, 64-0, then eventually lost to Spencer, 44-0, in the final game.

An article in the Albemarle News in November 1922 said of the final score, “But never mind; just you watch our smoke next year.”

As football grew in popularity and participation over the next years, it would be a Tarboro native who brought the team to prominence.

Legendary coach Toby Webb took the Albemarle program and built it into a powerhouse in the 1950s.

Playing in the Western North Carolina High School Activities Association (WNCHSAA), Albemarle won championships in 1953 and 1957, along with being the state’s runners-up in 1956 and tying for the crown with Valdese in 1955.

Many of the members of the Stanly County Sports Hall of Fame played for the Bulldogs in the early days and for Coach Webb, including the long-time “Voice of the Tar Heels” Woody Durham, Bill Furr, Bob Gantt, Bear Knotts, Doug Knotts and the Montgomery brothers, Don, Kent and Monty, John David Moose, Rick Russell, Roger Smith Sr., Wade Smith and Elbert “Whit” Whitley.

Albemarle continued to play in the WNCHSAA until joining the North Carolina High School Athletic Association in the fall of 1977, when the program began and continued to put its name in the record books through to the current century.

Since 1962, when North Stanly, South Stanly and West Stanly high schools first opened, Albemarle has the best overall record of the four county teams (357-336-7) and the highest overall win percentage (51.5) in the same time. Albemarle also is 49-20 in the NCHSAA playoffs between 1972 and 2020, which is 23rd in the state for most playoff wins and 12th overall in winning percentage.

Another Albemarle name which appears in the NCHSAA record books is Tyler Lewis. He has the record for most career points by a kicker, 428, from 2000 to 2003, and has the record for most points by a kicker in a season, having scored 130 points in 2001 and 2002. Lewis is also tied for sixth with several others for the longest field goal in NCHSAA history, a 57-yarder in 2003 against Hendersonville. Lewis also had the most extra points in a career (350) and a season (112 in 2001).