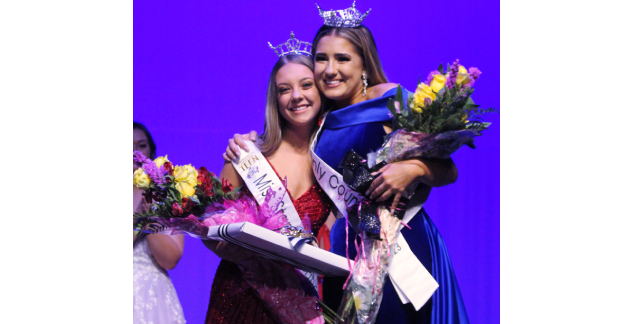 Sides, celebrating her 20th birthday on Saturday night, said afterwards when she heard her name she really could not believe it.

“All I’ve focused on for the past couple of months has been this pageant, and to gain scholarship money from this pageant,” Sides said. “I really just can’t believe it right now.”

During the talent portion, Sides did an acro dance to the song “River” by Bishop Briggs. Acro dance combines dance and aerobic movements, which Sides said she had never done before.

“My song really, really pushed me out of my comfort zone and it really made me experience a different part of dance that I have never before experienced,” Sides said.

Her social impact pitch is to support community colleges, saying when she graduated from high school “the four-year university life was not for me. I still felt pressured to attend one since there were not a lot of people talking about the benefits of attending community college.”

As a recent grad of Stanly Community College with an associate’s degree in business administration, Sides said she was proud to graduate and be debt free.

“Community college is a great way to get started after high school,” Sides said. “It’s a low cost, affordable option for those who are undecided, so join me and commit to community college.”

Sides said starting at SCC was great because it helped her “to get started (and) for people to help you figure out what you want to do. I want to spread that to people, and not just my age, but people in the older generations that want to start over in life.”

Sides’ Carolina Princess, who will accompany her to the state competition, is Brook Milano.

Other award winners of the eight Miss Stanly candidates included Katie Parah, who won the talent award by playing on the piano an original piece called “Tribute To My Dad.” Parah was also named Miss Congeniality and was the first runner-up for the Miss Stanly crown.

Peyton Hatley was named the People’s Choice Award winner and the Spirit Award.

“It was so much excitement and so much shock on how this was going to go,” Potts said. “I’m so excited.”

For her talent, Potts went to her strengths as a dancer, having studied for 12 years. She dances with Studio B Dance Company in Faith, a company just opened by her family.

“Dance has always been one of my passions,” Potts said. “I recently got taken out of it because of an injury, so I just got back last week…(dance) just drives me to be my best.”

Dance also works in her social impact pitch, titled Everyone Can Dance. Working with a company called A Chance To Dance, Potts plans to go into the community to spread the word about teaching dance to children and people with special needs or differences. Dancers in these programs can train to compete in competitions.

“They matter, and they have a purpose and are just as valuable to us as everybody else,” Potts said.

She recalled when she was in first grade making friends with a little boy who had special needs.

“I stuck with him all through elementary school (and) middle school. I was really there for him, and he was there for me, which was amazing,” Potts said.