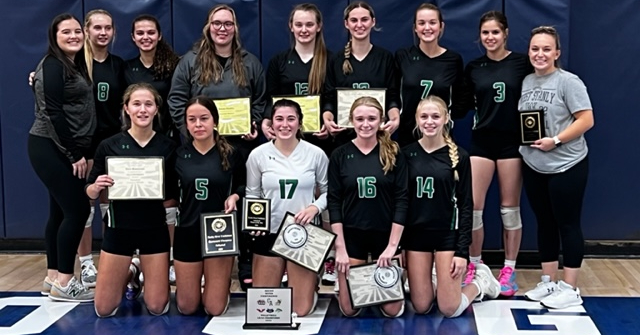 For the past four seasons, the Rocky River Conference volleyball season has been dominated by the West Stanly Colts.

The current year is no exception as the Colts made it four straight conference regular-season and tournament titles, including Wednesday’s 3-0 win over Anson in the finals of the tournament.

West Stanly (20-6) has finished four straight seasons going undefeated in conference play, led on the team in kills by a trio of sophomores. Rory Huneycutt has 209 kills for West with Addi Barbee adding 206 kills and 218 digs, and Stella Bondurant has 206 kills.

The offense is paced by senior Maycee Williams with 807 assists this season while senior RRC Player of the Year Kelsey Parker has 286 digs as the team’s libero. Williams recently broke the 1,000-assist plateau for her career, while Parker is the first player in the history of West volleyball to record 1,000 digs.

West has three seniors this season including Williams, Parker and Emma Rhodes (163 kills). Unfortunately for the Colts, Rhodes suffered an ankle injury previously and is out for the rest of the season.

“Our offense is very young this year, our top three hitters being all sophomores is pretty awesome,” head coach Steffi Dutton said.

West has two freshman hitters in Payton Watson and Saylor Edwards whom Dutton said “are stepping up big time in the postseason.”

Dutton, coaching in her final season with West Stanly, said this season she could honestly say, “every single person on the team plays such an important part in our success. Numbers do not do it justice. This has definitely been one of my favorite years coaching and I’m glad to be ending my coaching career at WSHS with this group.”