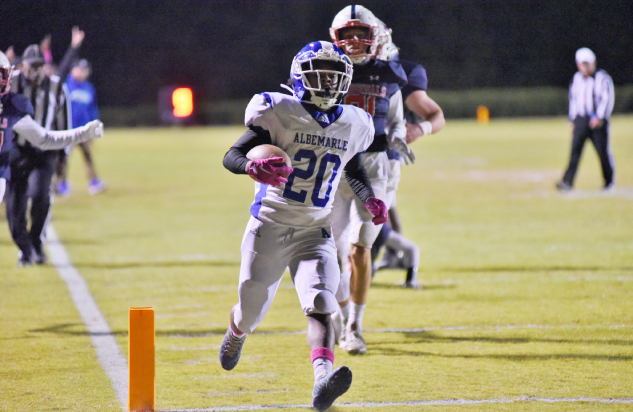 With the three higher classification teams in the combined 1A/2A conference on top of the standings, Albemarle needed a win to maintain its place in the 1A part.

Albemarle took an early lead and never trailed, further closing in on the playoffs with a 34-0 shutout of the Cardinals.

The shutout win for the Bulldogs (3-5, 2-2 YVC) was the team’s second this season after shutting out South Stanly two weeks ago.

Malik Watkins put Albemarle on the board with just under two minutes remaining in the first quarter with a 20-yard touchdown run. Cristo Sanchez’s extra point gave the Bulldogs the early 7-0 advantage.

The score stayed that way until late in the third quarter, when Watkins scored on a one-yard carry to put Albemarle up 13-0 in the final 30 seconds of the period.

Watkins struck again for Albemarle early in the fourth quarter when he forced a Cardinals fumble and returned it 84 yards for a touchdown.

Willie Brown added a rushing touchdown for the Bulldogs and Jaylen Pinkney rounded out a 21-point fourth quarter with a 67-yard touchdown run.

The win was Albemarle’s second in a row over Union Academy (1-8, 0-4) and improved the Bulldogs’ overall record against Union to 6-2.

Albemarle returns home Friday to host North Stanly (5-4, 2-2). The Comets and Bulldogs are tied for third place overall in the conference.