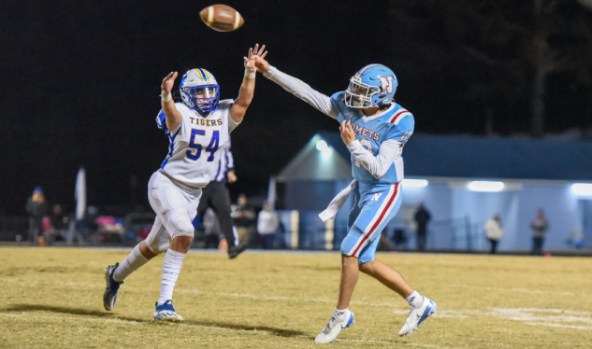 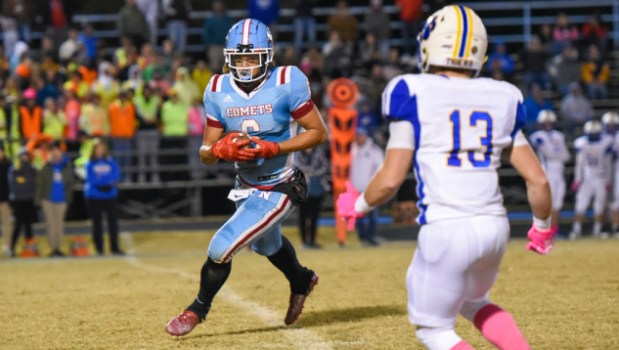 North Stanly wide receiver Gavyn Covington finds room in the middle of the field after one of his four catches in Friday night's game. (Photo courtesy of Dawn Lucas)

Both played well, but the ground game of Moose and the Tigers proved too much for the Comets in a 28-10 loss.

The Tigers had 338 net yards on the ground on 51 carries, getting an average of 6.6 yards per attempt. Quarterback Lawson Little had two rushing touchdowns as well before leaving the game with an injury.

Cam Smith again led the ground game for North (5-4, 2-2) with 76 yards on 13 carries and added five pass receptions for 107 yards. Lilly added 28 yards and the only touchdown of the game for the Comets, coming in the second quarter when North trailed 14-3.

Comets QB Chance Blake threw for 258 yards on 13-of-28 passing but was intercepted twice. One of Blake’s passes was picked off in the end zone by the Tigers in the third quarter. Mount then drove 80 yards in eight plays with Bo Barbee at quarterback, with Moose’s second TD putting the Tigers up by 18 points with just under 10 minutes left in the game.

North’s Gavyn Covington had four catches for 80 yards in the game, with Jaylon McCoy also hauling in four Blake passes for 71 yards.

Penalties hurt North as the Comets were whistled 11 times for 69 yards, including several holding calls which contributed to drives stalling out.

North also lost two fumbles in the game, one coming at the Mount 3-yard line in the second quarter ending a long possession for the Comets.

“Our defense stayed on the field way too long (in the second half),” North head coach Scott Crisco said. “We could not sustain a drive; when we got a big play, we got a penalty.”

Crisco, who was honored before the game for his upcoming retirement, noted North had four opportunities inside the opponents’ 20-yard line and only scored one touchdown. The other points in the game came from a 31-yard field goal from Kaden Young on North’s opening drive of the game, which answered a seven-minute scoring drive by Mount.

“This one, we’re going to have to learn from it this week and bounce back,” Crisco said.

North goes on the road for the final regular-season game Friday night to Albemarle (3-6, 1-2). The Bulldogs won at Union Academy Friday night 34-0.

“We have to stay healthy this week; we will get everybody back this week…we just have to refocus and get our confidence back,” Crisco said.

The Comets can also claim the Stanly Cup for the fifth time in Crisco’s eight seasons with the program and the first outright title since 2018 with a win versus Albemarle.