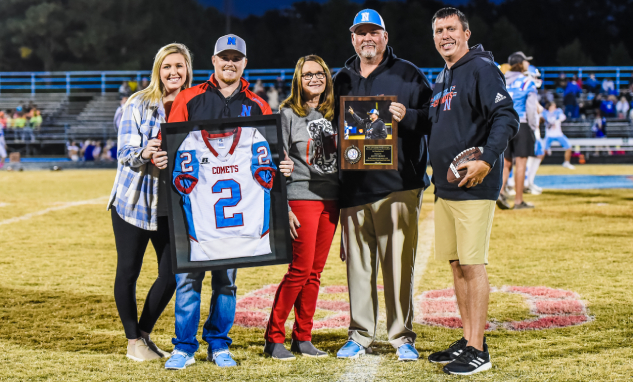 The North Stanly football program, having enjoyed the most success on the field in recent years, celebrated the retirement of its football coach Friday night.

In a pregame ceremony, Scott Crisco was honored for his time spent as an assistant coach and later as head coach of the Comets. He was presented a framed jersey worn by his son, Noah, when Noah was the starting quarterback for North. Crisco also received a plaque with the team’s motto, “One Team, One Goal,” and the message, “Never underestimate the difference you have made and the lives you have touched.”

He was surrounded by friends, family and his assistant coaches during the ceremony. After the game, Crisco talked about the ceremony, saying, “that got to me…it was humbling.”

In his eight seasons as head coach, Crisco is 59-29 overall, the most wins for any football coach in school history, and the second-best winning percentage (67.1 percent). Only Paul Hollingsworth in 1962 and 1963 (21-9, 70 percent) has a higher win percentage than Crisco.

Under Crisco, North has won four Stanly Cups outright and shared last season’s county crown with West. North can win a fifth outright title this season as the Comets head to Albemarle for the regular-season finale.

Crisco said he was retiring because he got his years in so he can draw retirement from the state, and cited family reasons for choosing to retire, including soon becoming a grandfather.

“It’s time to take care of my family,” Crisco said.

Crisco credited his assistant coaches for what they have done over the years.

“I say it all the time: a head coach can’t do anything without assistant coaches. I give all the honor to them; they did a heck of a job. Everyone sees me as head coach, but they don’t see what the assistant coaches do behind the scenes, all the planning. I’m honored to have them with me.”