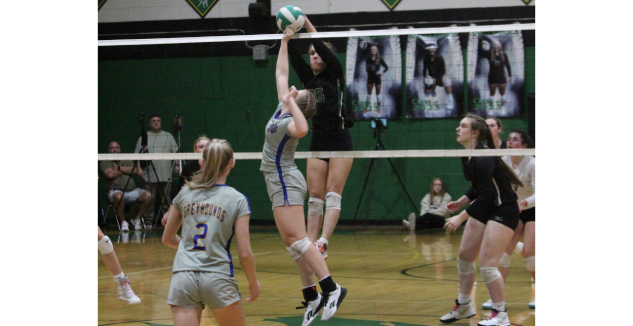 The young West Stanly volleyball team faced a tough test Saturday in the opening round of the state 2A playoffs.

West hosted the No. 26 seeded North Surry Greyhounds, who finished in fourth place in the 2A Foothills Conference and were ranked 31st in the 2A West by MaxPreps.

“Saturday games haven’t been our best, (but) finally we pulled a win out,” West head coach Stephanie Dutton said. “I pulled the girls out into the hallway and told them every single one of them (that they were) good volleyball players and they needed to believe it.”

Dutton said she told the players, when West was down two sets to one, to “stop worrying about mistakes you made and think about what you can do to make the next play better…those last two sets, nobody looked over at me or my assistant and asked what they did wrong. They just played. They started trusting each other had confidence in themselves to finish the match.”

West’s win marked the fifth straight season in which the Colts have advanced to the second round of the 2A state playoffs. The Colts have been undefeated in conference regular-season play for the four seasons in which Dutton has been at the helm. A standout libero during her playing days at Albemarle and Bluefield College, she will step down at the end of the season.

West Stanly hosts No. 11 seed Owen (15-7) Tuesday night at 6. The Warhorses beat Avery County in straight sets Saturday in the first round, avenging a loss earlier in the season to the Vikings.