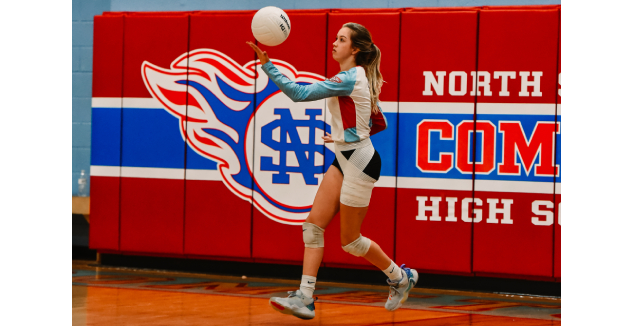 North Stanly senior Josie Talbert lines up a serve during a home game this season. (Photo Contributed by Dawn Lucas)

It has been an up and down season for the North Stanly volleyball team, but the Comets have had solid performances in the postseason, including Tuesday at Maiden in the second round of the NCHSAA 2A state playoffs.

North eliminated the Blue Devils (20-7), who won a share of the Catawba Valley Conference title and the conference tournament.

The Comets trailed by as much as seven points in the first set, 21-14. The Comets rallied to get within three, 24-21, before the Blue Devils took the set.

North jumped out to an early lead in the second set and rallied after an 8-2 run by Maiden with a 6-0 push of their own to take the lead in the set for good.

In the third set, North jumped out to a 10-2 lead and eventually won the set by double digits, ended by a Talbert ace.

A 9-0 North run in the fourth set gave North the lead en route to the set and match victories.

North Stanly has not been to the third round of the state playoffs since the 2018 season when the Comets lost on the road to East Surry.

This season, North’s two All-Conference players, Bell and Aniston Talbert, lead the team in kills. Bell has 297 kills in matches this season through the second-round win while Talbert has 267.

Senior Josie Talbert, an All-YVC Honorable Mention, leads North this season with 228 digs, while Vanhoy has paced the offense with 406 assists. Speight has added 328 assists for the Comets this season.

According to first-year head coach Daniel Galloway, North has dealt with injuries this season as the Comets finished fourth in the 1A/2A YVC.

“The low point of the season was certainly when we lost three matches in a row all in a deciding fifth set,” Galloway said, referring to losses to West Stanly, Gray Stone and South Stanly.

However, he added he is “very proud that we are now playing some of our best volleyball at the end of the season.”

North Stanly (15-10) is the No. 23 seed in the 2A West and the lowest-seeded 2A team still alive in the playoffs. The Comets travel tonight to Southwestern Randolph (25-3) to face the No. 2-seeded Cougars.