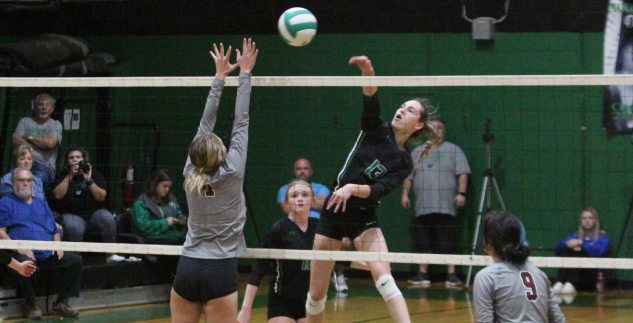 The West Stanly volleyball team on Tuesday looked to reach the third round of the state 2A playoffs for the first time since the COVID-shortened season of 2020.

Maycee Williams paced the offense for the Colts with 24 assists, adding nine digs and two aces, while libero Kelsey Parker had 17 digs. Gracie Huneycutt had 16 digs for West.

The win was costly for the Colts, however, as sophomore Rory Huneycutt suffered an apparent ankle injury in the second set. Huneycutt, who entered the playoffs second on the team in kills, went up for a block and landed awkwardly.

Owen led the first set early, 6-2, but West battled back, winning 10 of the last 13 points in the set versus Owen (15-8). The Colts made another late run in the second set, then flipped the script by taking a 9-1 lead in the third. Owen got as close as 18-14 in the final set, but West outscored the visitors 7-1 over the final eight points of the match.

“Our offense started to play shots; they moved the ball around single blocks,” West head coach Stephanie Dutton said. “Our hitters put the ball in spots where we told them. We’re struggling right now and everybody is a little under the weather. I’m happy we pulled it out.”

Grace McIntyre, a sophomore who stepped up for the injured Huneycutt, is one of two players Dutton said she called up from JV for the playoffs.

“They have been practicing with varsity and dress out for us now. It’s helped in situations like these where you have to throw people in. Grace is such a competitive person,” Dutton said.

Parker, a senior and team captain, said the team was communicating better Tuesday than in Saturday’s five-set first round win.

“We were more on our toes and ready to go,” Parker said.

Williams, West’s other senior captain, talked about the team moving forward in the playoffs saying, “we want this. We are fighting hard. Like Saturday, we didn’t start strong, but we picked it up.”

West goes on the road Thursday to face Brevard (21-5), the No. 3 seed in the 2A West. The Blue Devils won Tuesday in straight sets over No. 19 Community School of Davidson.