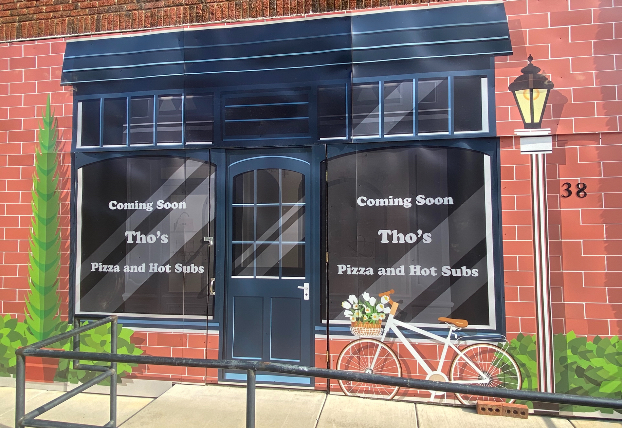 The new look for the vacant building along Falls Road that Tho Pizza and Hot Subs will move into next year.

For many months after a fire in May damaged the building next to Badin’s town hall, where Tho Pizza and Hot Subs plans to move into, it had been boarded up with plywood. It was hard for anyone to tell that the property actually had a promising future.

But thanks to the dedication of a few Badin residents, namely Bridget Huckabee and Jenny Henderson, Tho’s new location, at 38 Falls Road, has received some much needed care. Another vacant storefront, the former Cottage House building, was also revamped.

After discussing several ideas, including painting the facade, and also reaching out to Town Manager Jay Almond for his input, the duo contacted Badin native Tonya Gelbach, co-owner of TV Set Designs, a Charlotte-based company that designs and builds television studio sets and anchor desks.

“I got worn out looking for ideas that we could physically do ourselves,” Henderson said about reaching out for professional help.

Gelbach, who grew up in Badin and whose mother and sister still live in town, wanted to do her part to improve the downtown.

“I’ve known both of them (Huckabee and Henderson) for years and have always made a standing offer that we’re always happy to help, in any ways we can,” Gelbach said.

As she was talking with her son Myles, the company’s art director, about ways to enhance the storefront, he suggested creating a colorful panel to be placed over the plywood, which Gelbach liked.

“We have a big flatbed printer here so we do a lot of printing like this,” Gelbach said.

Myles and his team installed a 12-foot-tall by 16-foot wide graphic panel a few weeks ago, comprised of several materials including sintra, a rigid plastic.

Instead of plywood, the property is now adorned with a blue-colored storefront image with the words “Coming Soon Tho’s Pizza and Hot Subs” in white lettering. It will serve as a temporary placeholder until construction for the new space begins.

Tho’s, which is owned by Tho and Phoudone Naovarath, will move into the new space hopefully sometime next year, Phoudone told the SNAP.

“A lot of people didn’t know that was their business, they didn’t know what it was, so we suggested that they put ‘Tho’s Pizza and Hot Subs Opening Soon,’ ” Huckabee said. “Use it as a billboard…as well as make it look inviting.”

Gelbach and her team came up with a design concept for the Cottage House property, a few hundred feet from Tho’s new space. The two panels facing the street along with the two adjoining ones, which had been papered over, now proudly bear the town’s logo: the flour-de-lis symbol encased within a green arrowhead. 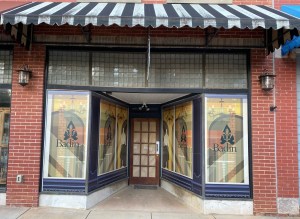 Badin officials have been pleased with the revitalization efforts along Falls Road.

“I think that’s a well-intentioned and well-executed project and I think it’s a great idea,” Almond said about the improvements. “There is a business coming and it is going to be on the horizon and there is a revitalization going on, but you can’t necessarily tell. And this gives you that indicator, if shows you that there is not only something on the way, but there is something happening right now.”

“We welcome private sector investment in Badin and applaud the initiative and creativity of these Badin champions to improve the looks of our downtown,” added Mayor Anne Harwood.