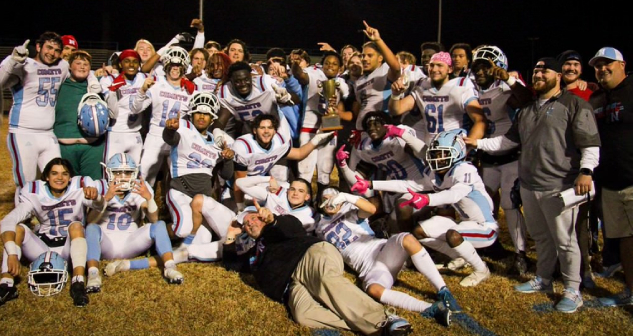 The North Stanly varsity football program had not been as close to losing the team’s active win streak to Albemarle as the Comets came Friday night.

Albemarle, looking for the team’s first win over the Comets on the field since 2014, led 27-14 after three quarters.

But North Stanly, who has been more of a second half team in 2022, scored 30 unanswered points in the final quarter to win the Stanly Cup 44-27.

Cam Smith had a monster night for the Comets (6-4, 3-2 YVC) finishing with 237 yards on 36 carries, scoring three times on the ground and adding a pass reception for another touchdown.

But it was Smith’s play on special teams that completely changed the complexion of the game. Leading 27-21, Albemarle punted a ball which rolled down to the Comet 13-yard line.

Before the whistle blew to stop the play, Smith, standing in front of the ball, picked it up.

“I saw everyone going down; (Albemarle) was already going to the sideline,” Smith said. “When they went to the sideline, I just picked up the ball and ran. Everybody was blocking (for me) and I knew it was going to be a touchdown.”

With part of the punt coverage team for Albemarle slowing up as if the play was over, Smith raced 87 yards down the visiting sidelines for a touchdown.

The play by Smith put North up for good; the Comets added two more Smith rushing touchdowns and DJ Watkins tackled a Bulldogs’ running back in the end zone for a safety, capping off the Comets’ rally.

“We had the wrong mindset the first half. I told (my teammates) at halftime to keep their heads up,” Watkins said. “We got to keep pushing. We’ve been through this before; we just have to keep playing.”

Defenses from both teams forced a scoreless first quarter, including two interceptions of North quarterback Chance Blake by Jason Wall and Jaylen Pinkney.

Albemarle took the first lead in the game on Pinkney’s 36-yard touchdown run to start the second quarter, the first points of the game for either side.

North capped off a nine-play, 33-yard drive with just under three minutes to play when quarterback Chance Blake on fourth down scrambled to his right for a 7-yard touchdown.

Kaden Young’s extra point tied the game, but the game did not stay tied for long. On the ensuing kickoff, Zyion Geiger returned the kick 82 yards for a touchdown and a 14-7 lead.

Albemarle QB Dre’ Davis put the Bulldogs up by two possessions with a 36-yard screen pass to Kaine McLendon as time expired in the first half. A missed extra point left Albemarle leading 20-7 at halftime.

“I don’t know what it is, but we always come out without the right energy,” Smith said of North’s first half efforts. He added that like in the Randleman win, the Comets played better offensively in the second half.

“We’ve just got to come out and bust (the opposition) in the mouth in the first half and keep busting them in the mouth the whole time,” Smith said.

Despite the difference in yardage, Albemarle maintained the lead through three quarters, 27-14. Both teams scored touchdowns in the third, Smith carried the ball on all four plays of North’s first scoring drive in the second half, a 66-yard drive finished with a 31-yard TD run for Smith.

Albemarle answered almost immediately. Geiger returned the ensuing kickoff for a touchdown, but it was called back on an illegal block penalty. The Bulldogs went back up by two possessions when Davis crossed the goal line with 2:35 left in the third.

The 30-point quarter for North started at the end of a seven-play, 69-yard scoring drive. The first play of the fourth quarter saw Blake connect with Smith for a 22-yard touchdown pass, pulling North within six again, 27-21.

After taking the lead, North scored on the team’s next two drives to lead 42-27 with 4:32 left on the clock. Both were touchdown runs for Smith, with a 53-yard run on a busted reverse play by Gavyn Covington setting up one of Smith’s fourth-quarter TD runs.

“It was supposed to be a reverse, but when Chance flipped me the ball, I was supposed to flip it to Cam, but the defender was all over him. The center of the field just opened, and I took off,” Covington said.

The win for head coach Scott Crisco was his 60th career win as North’s coach, continuing to set the school’s mark for career victories for a football coach. Crisco also wins his final regular-season game, having recently announced his retirement.

“We talked to (the team) at halftime and told them they have to wake up, that they were just going through the motions. Once we scored that second touchdown, I think we realized we had made a ball game out of it.”

The North coach added his team went a little bit into “panic mode” in the third quarter trailing by 13.

Crisco also credited Smith’s efforts, saying he “100 percent has matured this season from last year. Where he has been at his best is leadership. He doesn’t just say it, he backs it up. If he wants you to give 110 percent, he will give 110 percent.”

Regarding the 30-point final quarter, Crisco said, “that was big time. Once our momentum went our way at the start of the fourth quarter, it snowballed from there.”

Winning North’s fifth outright county title, the coach added, was something he could not put into words. He gave credit to the players, saying, “they said they had my back, and they did.” He said he can’t say enough about his coaching staff, noting, “they don’t panic. They handle the business professionally and they know how to talk to the kids, what to say and what not to say.”

Counting the forfeited win in 2014, North Stanly has won nine straight over Albemarle. Both teams await Saturday’s playoff brackets announcements from the NCHSAA; the Bulldogs in the 1A and North Stanly in the 2A classification.

Smith said he was excited to win the Stanly Cup but also to play in the playoffs, which he has not gotten to do as a high school player.

“This is my first time playing in the playoffs and I feel great,” Smith said.

As Watkins said, “it’s not over yet.”