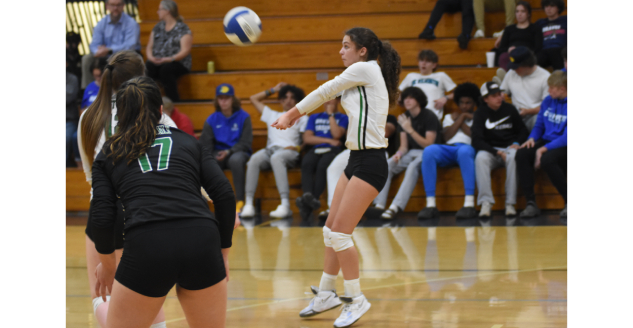 West Stanly's Kelsey Parker goes for a dig in Thursday's third round playoff game at Brevard. (Photo courtesy of the Transylvania Times).

The volleyball teams of North Stanly and West Stanly both reached the third round of the 2A state playoffs last week.

Both teams played on the road and saw their respective seasons end with three-set losses.

“We went down two hitters after Tuesday night’s game due to injuries and illness,” West head coach Stephanie Dutton said. “These girls played so hard and pushed every single point.”

The Colts also will lose their head coach Dutton, who said the past four seasons “have been nothing short of amazing. I have enjoyed watching this program grow and develop to become what it is today. Each year we pushed a little more and accomplished a little more each year.”

“This past season has been something special,” Dutton said. “I don’t think I’ve ever had a group of girls fight as hard as they did. No matter how many injuries or illnesses were thrown at us at the end of the season, these girls fought so hard to overcome each obstacle. I’ve never had a group where every single girl was all in and willing to give every ounce for the girl beside them. This was a special group of young ladies who I will miss very much. They truly gave me 100 percent every day.”

“I’m so proud of all the teams I’ve coached,” Dutton said.

“We ran into an excellent team, with the best defense we have seen all year,” Galloway said. “We were not able to get our offense running as efficiently as usual. I’m proud of how hard our team worked this year and what we were able to accomplish this season.”