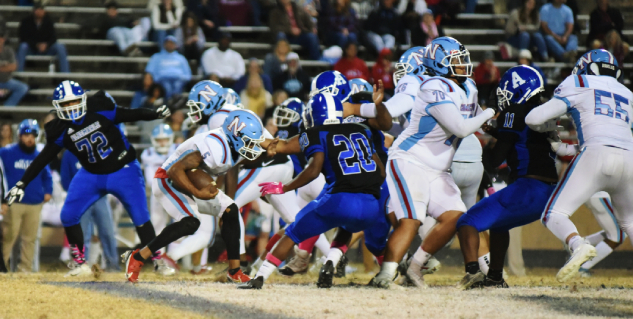 North Stanly's Cam Smith (No. 5) looks for room to run as Albemarle's Malik Watkins (No. 20) looks to make the tackle in Friday's game. (Photo courtesy of Starla Whitley)

The North Carolina High School Athletic Association released its final brackets over the weekend for the upcoming football playoffs.

For the second straight season, the football playoffs will not be subdivided as they were from 2001 to 2020, with four champions in the four classifications crowned instead of eight.

Two Stanly teams qualified this season; both will be on the road Friday night.

North Stanly will face one of the toughest and highest ranked teams in the state Friday night on the road after winning the Stanly Cup this season.

Monroe’s only loss of the season came at home to Porter Ridge, 24-20. The Redhawks won the Rocky River Conference title and outscored conference opponents 178-22 in four games.

Friday’s playoff game will be the first postseason game between the two schools, but the Redhawks and Comets have played 21 times as conference opponents. North won the first game in 1962, but Monroe has won the last 20. The last time the two teams played was in 2012, which Monroe won 64-0.

The Redhawks’ offense features senior quarterback Khamoni Robinson, who has thrown for 1,879 yards and 16 touchdowns to just two interceptions. He has completed 110 of 155 passes (71 percent) this season.

Monroe also has a 1,000-yard running back in junior Nate Crosby Jr., who has rushed for 1,176 yards and 20 touchdowns. Monroe averages nine yards per carry and has 2,034 rushing yards this season and 41 rushing TDs.

North also has two players who are over the 1,000-yard plateaus at their positions. Running back Cam Smith, a senior, has rushed for 1,469 yards and nine touchdowns, including five TDs in the Stanly Cup-clinching win versus Albemarle.

Comets quarterback Chance Blake, a junior, has thrown for 1,059 yards and seven touchdowns this season.

Albemarle qualifies for the playoffs for the second straight season and faces a long road trip Friday night, earning the No. 26 seed out of 30 teams in the 1A Western Region.

The Bulldogs will face No. 7 Murphy (7-3), who finished second in the Smoky Mountain Conference to undefeated Andrews, the No. 2 seed in the West.

In the all-time series between the two schools, Murphy leads 3-1. Albemarle beat Murphy in 2009 in the second round of the playoffs, the year Albemarle won the 1-AA state title. Since then, Murphy has three playoff victories over Albemarle, including the two-overtime victory, 42-41, in 2011. The two teams have not played since 2013.

Murphy is ranked fourth in the 1A by MaxPreps and fifth by Simmons, having losses this season to 3A Franklin, 24-7, Fannin County (Georgia), 56-30, and a loss in the regular-season finale to Andrews, 42-12.

Senior QB Cole Laney has thrown for 1,163 yards this season for Murphy, with 15 TDs to seven interceptions. He has completed 68 of 126 passes (54 percent).

Murphy also has a running back well over the 1,000-yard plateau in junior Hunter Stalcup. Through nine games, he rushed for 1,352 yards and has 16 touchdowns.