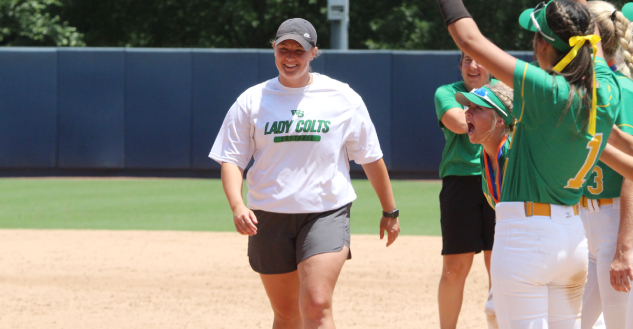 West Stanly’s fast-pitch softball program, having won five NCHSAA championships and consistently ranking among the best in the state, recently received another feather in its cap.

Walker Barbee, an assistant on the Colts’ coaching squad, was named by the National Fastpitch Coaches Association as Assistant Coach of the Year for all high school programs in the country.

According to the NFCA website, the award “salutes the efforts of coaches from the various NFCA membership categories for their tireless dedication to the sport of softball and to the continued education, growth and development of young women, both on and off the playing field.”

The West assistant coach joined the team in August 2021 and was part of the Colts’ 2A state championship in 2022.

Barbee said she was “stoked” when she first heard about winning the award, adding, “it’s a pretty big honor to be nominated for an award like that, especially one on a national level.”

Having played catcher at NCAA Div. I softball at the University of Pittsburgh, Barbee said to be a small-town coach winning the award, she “never would have dreamed” she would win an award like this, especially “to be recognized with so many awesome coaches throughout the nation.”

Her responsibility on West is as the Colts’ primary hitting coach, along with working with the team’s catchers and West’s overall defense.

She said offensively it is her job to make sure the Colts “have a good game plan in the batter’s box,” as well as doing well running the bases. Barbee, as the team’s third-base coach, calls the offensive signals out for West.

“As far as scoring runs, when we see an opportunity, we’re always thinking (to take) an extra base,” Barbee said.

Defensively, she said, her job is to make sure players back each other up on throws as well as communicate to the outfielders where to throw. She said her job is “making sure we’re nice and sharp, that there are no routine errors.”

Playing catcher in high school and college, Barbee said, allowed her to have a leadership role when playing, as well as see the game from a catcher’s perspective.

“It’s allowed me to be able to communicate what I expect out of (the players) and also why (things) needs to be that way,” Barbee said.

Barbee coaches the Colts with the same outward passion and emotion with which she played, which she said is just her personality.

“I was that way as a player. I was emotional. I love the game so, so much. I put every ounce of effort, love and pure passion in to anything I do in the sport,” Barbee said.

Head coach Emily Smith was a pitcher for West Stanly and later Catawba College. Barbee said the relationship between the two is a lot like being battery mates.

“I could not be more thrilled for Walker to win the NFCA High School Assistant Coach of the Year award,” Smith said. “This is a national award, only given to one high school coach that received nominations from all over the country. There is no one more deserving of this than she is.”

Smith said Barbee “is a vital part to the West Stanly Softball program, and I am thankful every day to have her on our staff. She has a tremendous knowledge of the game and a passion to share it with our players.”

The West Stanly program nominated Barbee for the award, Smith said, adding she was told two days before the announcement was released.

“It was a very hard secret to keep,” Smith said. “Walker is involved in so many facets of our program, and she is always there to help. She is very dependable, and she always gives one hundred percent effort every day. She is an excellent role model for our players. Walker is not simply an assistant coach…she is a big part of the heartbeat to our program and helps it to be successful.”

Barbee will receive her award at the NFCA Annual Awards Brunch Dec. 10.