Gray Stone soccer moves to third round in state playoffs 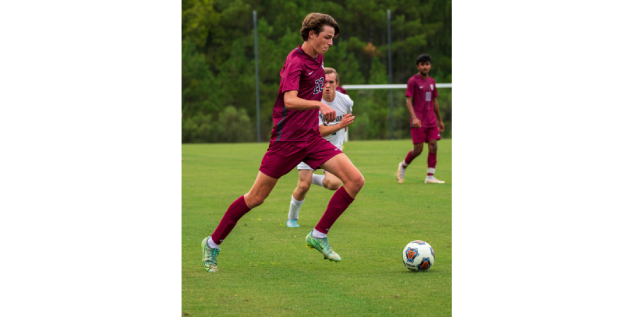 Desmond Bullard, a junior, has set the Gray Stone record for most goals in a season. He has 48 goals through the second round of the 1A state playoffs. (Photo courtesy of Michael Bitzer).

Last season, the Gray Stone men’s soccer team put together a strong season, finishing 18-5 overall, winning the Yadkin Valley Conference title and reaching the fourth round of the 1A state playoffs.

This season has been just as good for the Knights and maybe even better. Gray Stone is 19-3-1 overall, again winning the YVC title, and is the No. 3 seed in the state playoffs.

Gray Stone has advanced to the third round of the state playoffs after Thursday’s 4-1 home win over No. 14 South Stokes.

The Knights host No. 11 seed Bradford Prep (12-7-3) Monday night at 6 p.m. in the third round. The Bears advanced to the third round with a 6-3 road win at No. 6 Eastern Randolph. Gray Stone and Bradford played earlier in the season to a 3-3 tie.

Desmond Bullard, who continued against South Stokes to add to his Gray Stone record for goals in a season, had a hat trick for the Knights while Arkyn Pethel added a goal.

Bullard, a junior, has 48 goals on the season and had a team-high 16 assists going into the postseason. As a team, the Knights have outscored opponents 114-26, including 74-8 in YVC games.

The Knights’ season opened with a 5-1 loss to the Community School of Davidson and a 3-1 loss to Pine Lake Prep. After the tie with Bradford Prep, Gray Stone has won 19 out of 20 matches, the lone loss coming at Union Academy, 2-1. The Cardinals, the No. 12 seed, are in the third round as well and travel to No. 4 Bishop McGuinness.