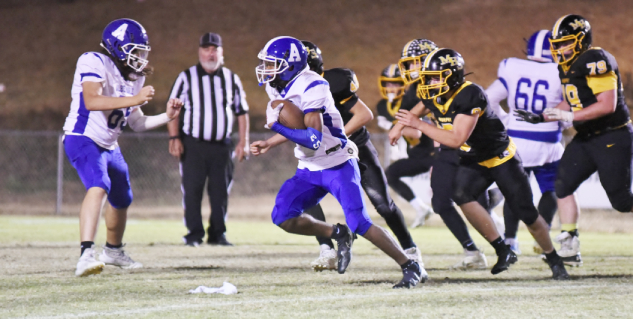 The Bulldogs made it back-to-back seasons with an appearance in the state playoffs Friday, making the long trek into the mountains as the No. 26 seed to face No. 7 Murphy.

Albemarle went down early in the game but put points on the board in the latter stages, losing to the hosts 49-20.

Through the air, Cole Laney was 4-of-6 for 124 yards and two touchdowns.

Albemarle (3-8) nearly scored in the first quarter when Jaylen Pinkney took a kickoff return for a touchdown negated by a holding penalty.

In the second half, Albemarle broke the shutout when quarterback Dre Davis threw a touchdown pass to Jason Wall around the four-minute mark of the third quarter.

Pinkney scored in the fourth quarter on a 30-yard TD run, then senior C.J. Ellis added a touchdown run in the final minutes of the contest.

Defensively, Malik Watkins led Albemarle with 10 tackles while Vince Gregory and Kenny Miller had six tackles each. Yiterian Pergee had four tackles, one for a loss, and Tyquan McDonald had a sack and a tackle for a loss.

“While the season ended in disappointment on Friday, we took a major step forward this season. The future of Albemarle football is bright and exciting things are to come next season,” Albemarle head coach Richard Davis said.

Albemarle finished the season as the top 1A school in the 1A/2A Yadkin Valley Conference, having beaten South Stanly and Union Academy.