North Stanly football falls in the playoffs to Monroe 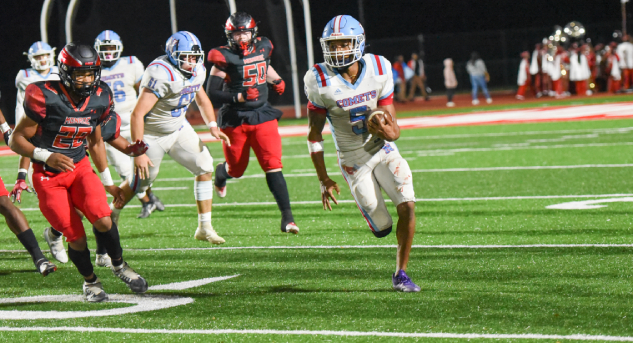 The North Stanly Comets faced an uphill battle Friday night as the No. 26 seed visiting No. 7 Monroe.

Monroe, ranked among the best 2A teams in the state, scored on seven of nine drives and advanced with a 56-6 win over North.

The Comets had chances early to score, taking the opening kickoff down to the Monroe 27 before eventually having to punt.

After the Redhawks scored on the team’s first drive of the night, North nearly answered. Quarterback Chance Blake found senior Cam Smith with a swing pass down to the Monroe 1. After the Comets could not score on two runs, North fumbled and Bryce Davis recovered for Monroe. It would be the first of six turnovers in the game forced by the hosts, two fumbles and four interceptions.

North Stanly (6-5) had its moments in the game, including a goal-line stand in the second quarter, stopping Monroe (10-1) four times from inside the 10-yard line.

The Comets then scored on a two-play, 97-yard drive. Juice Lilly broke a 44-yard run down the visiting sidelines, then Blake found Conner Lupole wide open behind the Redhawks’ secondary for a 52-yard touchdown pass.

North’s touchdown made it 14-6, but Monroe answered with three touchdowns in the final seven minutes of the first half. The Redhawks led 35-6 at halftime.

Monroe finished with 450 net yards of offense, led by quarterback Khamoni Robinson, who threw for 229 yards and three TDs on 13-of-18 passing. Zion Lindsey led the Redhawks with 85 rushing yards on 13 carries and three touchdowns.

Smith finished his career at North leading the Comets with 90 net rushing yards on 21 carries. North gained 143 yards on the ground, while Blake threw for 122 yards on 9-of-18 passing.

Penalties also hurt North in the game; the Comets were whistled nine times for 89 yards.

North head coach Scott Crisco, coaching his final game for the Comets, said what he felt after the game was hard to put into words.

Monroe, Crisco said, “was everything we thought they would be. They were fast, a very classy school. Their players played hard.

“We had a couple of games (this season) where we could have hung our heads and quit, but we didn’t. We kept fighting to the very end and made teams play us four quarters,” Crisco said.

“What I’ll remember about this team,” he added, “is even though they were knocked down, they got back up.”

Regarding his final season, in which North finished above .500, which the Comets did every season he was coach, Crisco said he will miss “the off the field conversations with the players, on the practice field and in the hallways, the bonding. Xs and Os go away, but those relationships are what I will remember.”

Crisco retires as the winningest coach in North Stanly football history, finishing 60-30 overall. He has the second-best win percentage in school history. Under Crisco, North won four Stanly Cups outright (2015, 2017, 2018 and 2022), along with a share of the county title last season, and conference titles in 2017, 2018 and 2020.

“The players bought into our coaching staff’s philosophy; the community bought in. Everybody wanted to play for us. For our staff, number one, we loved the boys, off and on the field, and they see that. It’s not just wins and losses. We love them when we lose or win.”

“That’s our attitude. I think our coaching staff will carry on that legacy.”