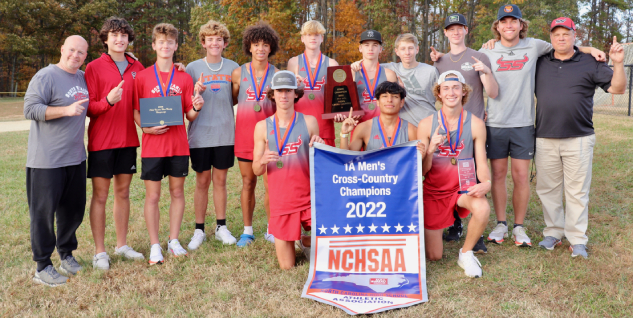 South Stanly’s men’s cross-country team entered Saturday’s state finals having put together one of the strongest seasons in the program’s history.

Having won the Yadkin Valley Conference for the fourth season in a row, and then winning the 1A Midwest Regional for the first time in school history, the Rebel Bulls made more history at the finals.

South Stanly, Cherokee and Christ The King all finished tied with 77 team points in the 1A event at the Ivey Redmon Sports Complex in Kernersville after scoring each team’s top five runners.

The result of each team’s sixth runner broke the state’s first three-way tie in a cross-country final. After the finishers running as individuals are removed, each remaining runner’s finish is recalculated.

For South Stanly, it was Eli Thompson as the sixth runner that lifted the Bulls to the school’s first men’s cross-country state championship, with Cherokee in second and Christ The King placing third.

Junior Joshwa Huneycutt earned All-State honors, finishing fifth overall and first for South with a time of 17:22.81. Andrews freshman O’Malley Salinas, running as an individual, was the 1A medalist with a finish of 16:43.83.

South Stanly head coach Michael Curlee said the success of the team started with the development of the middle school program.

“A lot of these kids started at middle school, started with me,” Curlee said, noting the time he spent coaching the South Stanly Middle School program.

“These seniors, I’ve been with them since middle school,” he added.

Curlee mentioned Garcia, a state title winning wrestler for the Bulls, as one of the runners whom he has coached since middle school, along with Oliver and Wright.

South finished as the state runner-up last season to Bishop McGuinness, which Curlee said, showed to his team “we knew what we needed to do to win…we took training to a different level this year.”

Curlee said his runners did not have their best times and fought their way through sickness to win the state title.

“These boys have literally known that the goal was to win (the title). There was no second or third; we got that last year and we were excited. This year, it was winning or nothing, and they knew what they had to do. Every single one had a part to play. The boys are on cloud nine now,” Curlee said.

South flew under the radar in state rankings, Curlee said, ranked around sixth in the 1A for most of the season. However, Curlee added, “I’d rather be looked at as the underdog so you don’t have a target on your back.”

Huneycutt said the Bulls “definitely pushed our mileage up per week a lot more than last year. We made sure we got in crucial workouts this season to work on speed and endurance to make sure we were in top shape.”

Regarding the state rankings, the junior added, some teams were ranked ahead of South because of those teams running shorter, faster courses.

“It definitely gave us that little bit of extra motivation,” Huneycutt said.

In terms of being in a three-way tie and South’s first men’s cross-country title, Huneycutt said, “I don’t think we can put it into words, honestly. I think we are all star-struck at the moment.”

“I’m just so happy the team has done what we have this year. It’s a whole bunch of kids that work hard with a goal in mind.” 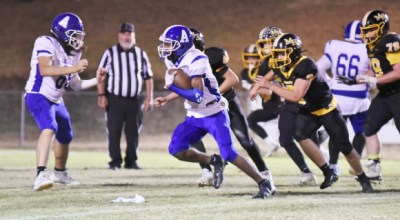